Getting the yard and fields ready

And what was Daryl doing? Well you guessed it. He spent the whole day working up the fields and then he started to plant corn. Absolutely perfect weather to be in the fields. 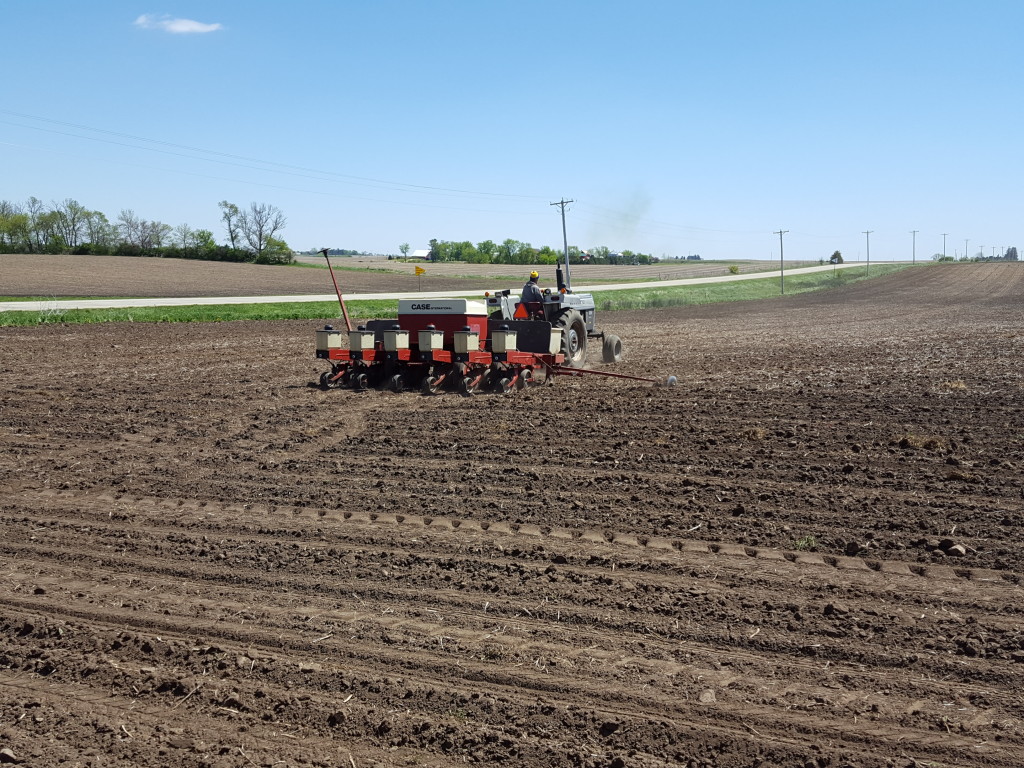 Farmers are a kind of funny group. Even though they are all a separate identity and have their own farms, when the first farmer is in the field and the others see them,  it doesn’t take long until all the farmers are in the fields.

So what did I do today? Well a nap would have been good but realistically my day had multiple jobs with the day starting out pretty early.

First thing on the list was to get to town and get some groceries and pick up the farm flowers for the summer. Now normally I try to grow some of my own – but that’s not happening this year. So off I go to my favorite Mennonite farm to see what I can find. Because I wanted to get a lot done today, I had only budgeted around 30 minutes to stay at the greenhouses. But once I got in the first of the 4 greenhouses, I threw off my whole schedule. After about a good hour later of taking flowers back out of my cart and adding others to the cart, I finally had what I thought was the perfect group of flowers and started for home. All I can say is thank goodness for trucks 🙂 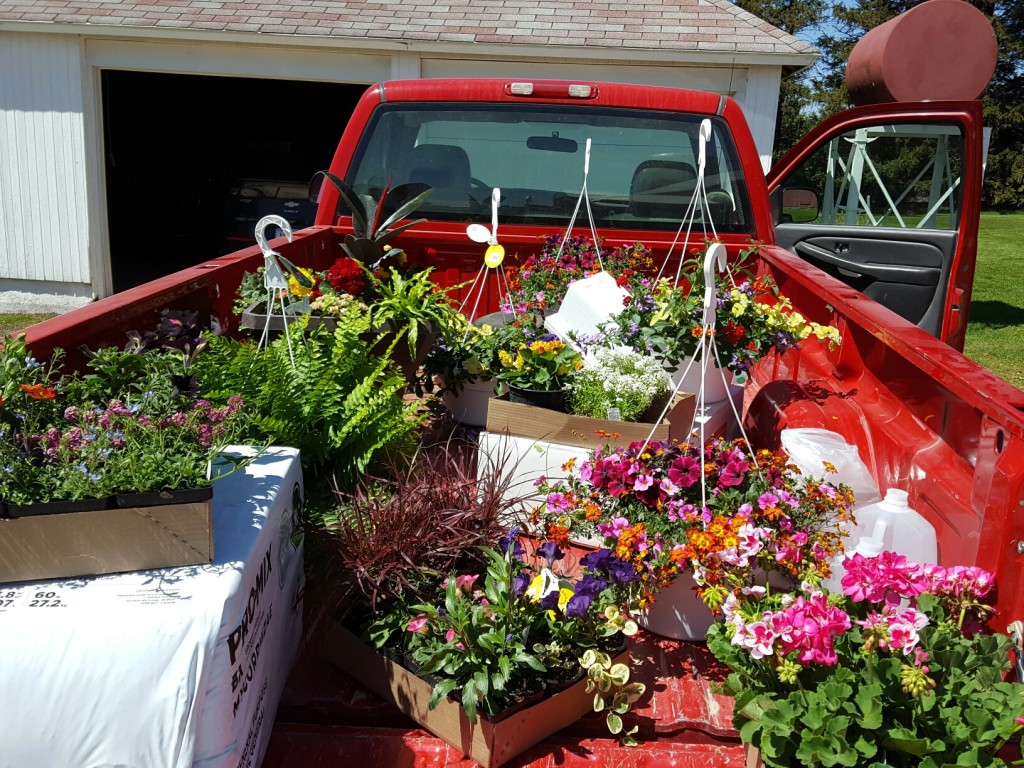 I had to drive a little slower with the taller plants, but that’s why there’s two lanes on the roads right?

Well after finally making it home and unloaded the truck, it was time to get dinner ready. Normally I’m not that excited about making dinner or supper during the week, but when Daryl’s in the field it’s a necessity and also a good challenge to see what I can come up with.

Now with dinner done it was time to tackle the ditches. I’ve got a lot of thoughts going around in my brain for the upcoming wedding and push mowing just might help to get rid of them. OK, maybe I should have picked something else that could have been a little more fun – but the mowing needed to be done, so I was off. The first ditch wasn’t so bad – but the second ditch. YIKES!  It still had water sitting in it. So I’m sure I looked pretty dumb because my clothing attire  was a tank top and shorts along with my high mud boots that went put to my knees. Now not only is this ditch really wet, but it’s the SNAKE ditch too. I’m just saying, if I would have met up with a snake I sure hope that I’d be able to run fast in those boots! But luckily no snakes and just a whole lot of work to get the grass mowed that was up to the tops of my boots. 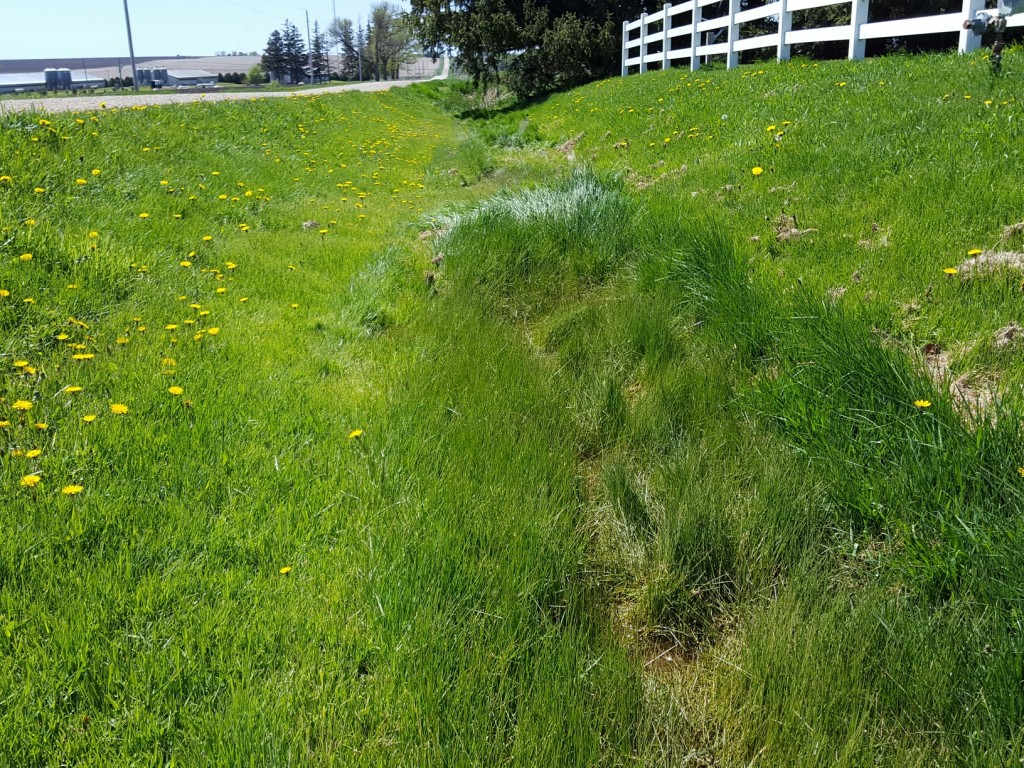 That was a big job, but a good job done never the less. After a little trimming I was ready to plant some flowers.

I was able to get most of them planted, but I ran out of compost which is so frustrating.I had about 75 lb. here but it wasn’t enough for the planters.  I guess I’m going to have to go to town tomorrow morning and get some more. Oh well, I also need some mulch, so it’ll be some more bonding time with the truck.

After a couple of loads of  laundry loads that got hung out on the line,  and firing up the grill for some barbecued hamburgers to bring out to Daryl for supper, the next thing on my list was to do chores. And do you know what? No Ears still hasn’t forgiven me for letting the last set of cows go. She just stands and stares at me and gives me the old stink eye. I’ll have to pick up some apples for her to see if I can get her back on my side.

And last but not least the night ended up making another batch of soap. I had a conversation during the day today with a the owner of a store in Elkader Iowa that wants to pick up my soap line. And since I don’t have any other stores in the area, it sounds like a great opportunity. All I can say about that is …  SCORE!

This entry was posted in Farm animals, Farming, Gardening, Soap. Bookmark the permalink.