I bet you were thinking that you were going to read something about going to Arizona or another state that is out west didn’t you? Well, sorry not today. But what I am going to write about is literally heading out of our driveway and going west. OK, I agree with you that this is not as exciting I’m sure as a nice warm vacation. But to the person who lives on a highway, going west usually isn’t such a big deal. But for us on the gravel roads? Well going west can be a challenge!

So this morning I knew the road grader went through not only once but Twice before I left and when I was just leaving I literally stopped at the end of our driveway and looked both ways. Was I feeling lucky today or should I play it safe? Because I was cutting my time pretty close I chose to go East and played it safe. Yeah I know.. chicken right? Well I made it to work on time with no issues. Now tonight I had to decide if I was going to take the gravel road to our house that I didn’t drive on or take the road that I knew that was good which meant that I would be coming in from the East. Well the good road meant that I had to drive all around the section to get to our farm and to be honest I just wanted to get home. So I took the less traveled road. So I started down the road and it didn’t seem too bad… well until I got to this one part of the road and then as I hit the brakes. The car kinda swerved and I eventually came to a stop. I was looking down the road in front of me at a snow bank that was pretty big and it was smack on top of the hill. So you’re probably thinking to yourself – who cares if it’s on the top of the hill? Well with that snowbank you will have to be pretty heavy on the foot to make sure that you don’t get stuck and that could mean that you will be driving up the middle of the road to stay away from the ditches. But the problem is that you just never know if there is someone coming at you doing the same thing from the other side. OK, now what? I thought maybe I should just turn around and go the safe way home but then I thought you big baby and hit the gas. Well you would have sworn that I was trying out for one of the races at the dragstrip! The back of the car swerved to the right and then to the left and I’m sure I had this kinda crazy look to my face. (it was pretty fun to be honest) I made it over the hill and soon I could see our farm. I parked the car just before our farm and jumped out to take a picture of the snow that’s piled up on the side of our road already. And the bad thing is that this isn’t even the worst spot on the road.

Our snow drifts heading West from the farm

Yup there’s a lot of snow out there and it seems to be between us and the highway. Oh well, I guess it makes you a good driver. Or maybe I should say a good dragster 🙂

The picture of the day is that of Waffles and Smoochie. I had good intentions of giving the cats and dogs their treats outside but the cats snuck in the door before I could catch them and found the treats first! I’m thinking Waffles is glad that his head is not any bigger or it wouldn’t fit in the bag! I was just glad that it didn’t get stuck. Smoochie patiently waited his turn for the ‘buffet in a bag’ . 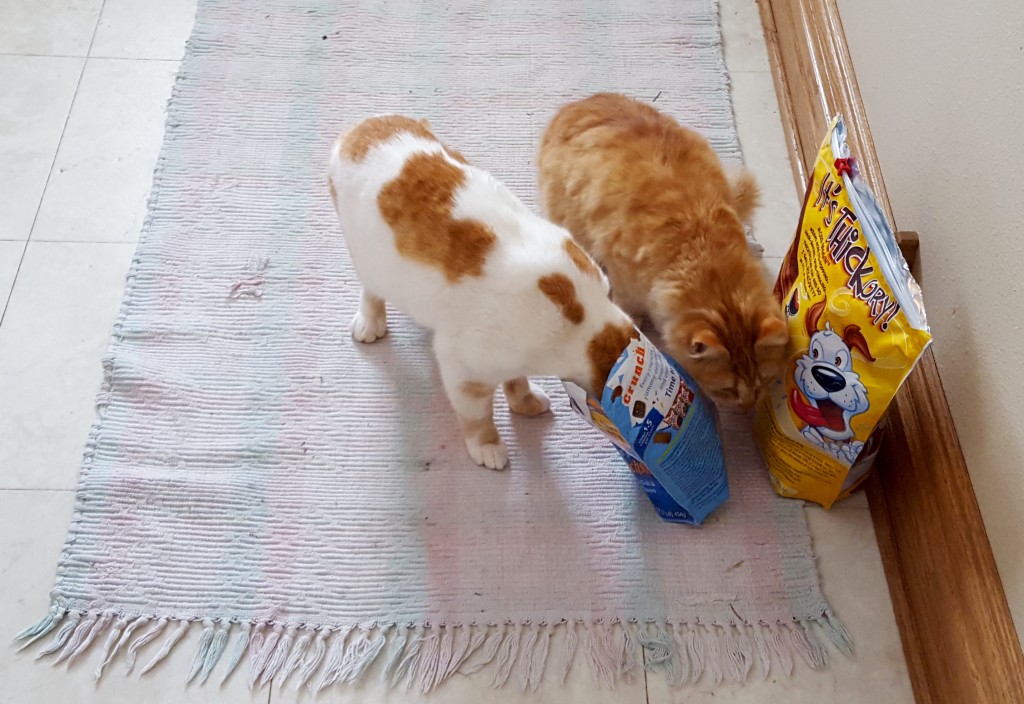 This entry was posted in Farming, Picture of the day. Bookmark the permalink.