Sometimes you just never know what the day will bring

Sometimes you just never know what your going to do on a Saturday.

I had the whole day planned and my list was complete. First thing was to Reno to the Vet’s office to get her vaccinations that are due. She was sure a trooper and it didn’t take long for our short trip and a couple of shots to be done and we were back at the farm.

Next was to go to our Post Office. With knowing that there are a lot of changes with the Post Offices these days, I decided to play it smart and make sure that I knew what the hours were at our’s.  Yup, this isn’t my first Rodeo.  The hours on the Web said 8:30 – 9:45. Sweet! So after the Vet visit I grabbed the box that I wanted to mail today and off I go. I don’t know if you’ve had this feeling before, but when I pulled up in front of the Post Office it looked quiet. Way too quiet. Then I noticed on the door that the hours were 7:30 – 8:45. I guess there was a day light savings time change or something that no one told the website about. Just another reason to hate the changes with day light savings! After another quick check on the web, I found a Post Office that said it was open and after I called, they confirmed that they are open. The bad part of this is that this office is about 35 miles away. So not cool. I was not expecting to go out into public too much and with no makeup and a crazy headband keeping my hair out of my eyes, I decided that I was going to go anyway.  I mean I shouldn’t run into anyone I know right?

So I was off. I made it to the next Post Office in time and when I was parking the car I noticed that there sure was a lot of other cars around the area.  Then I saw across the street there was some tents and a lot of people. 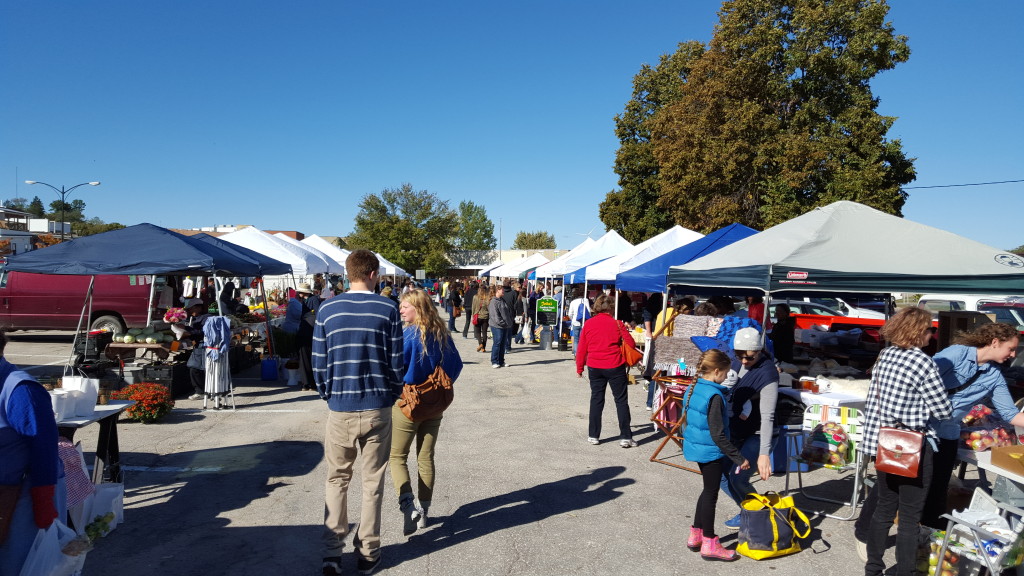 It was a Farmers Market. First things first, the reason that I was here was for the Post Office after all. I grabbed the box and into the building I went. And remember that I thought I could do this little run without meeting anyone that I knew? Well the Postmaster was a classmate of mine and she welcomed me at once!

Now that I got the box mailed off I went outside and looked again at the Farmers Market. I really wanted to go, but again I sure wish I knew that I was going to spend the morning in the public 🙂 I’ve never really been to anything like this before so off I decided to go. There was tons of vendors and of course I knew some of them. And as I looked around, I wasn’t the only one without any makeup on and wearing a sweatshirt.

My original plan was  to drop in at my Mom’s after the Post Office so that was going to be my next stop. But of course on route I saw this little shop that I like to stop in at if I have a chance,  so after I saw that I drove by it I found the first field lane and turned the car around. 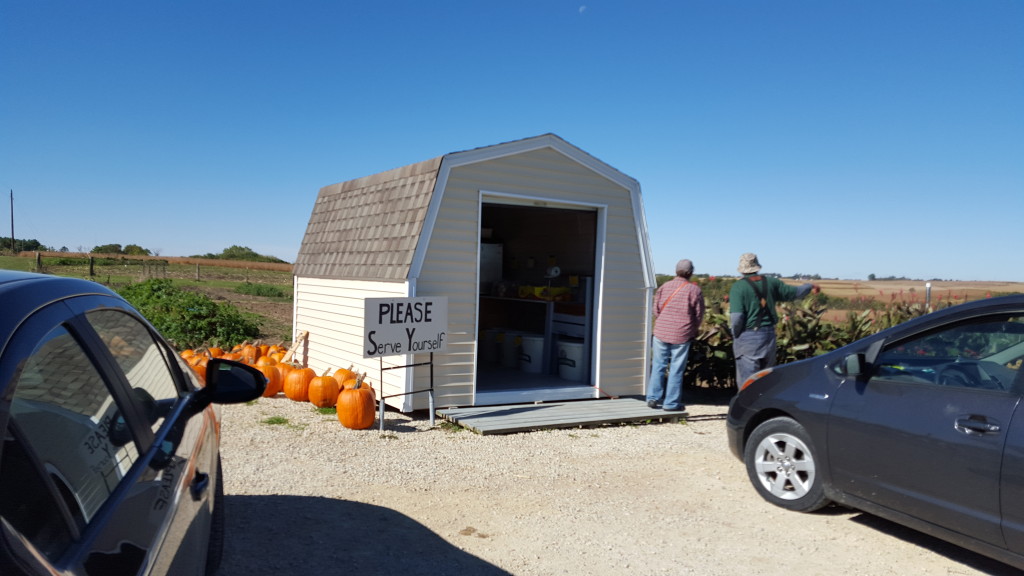 Now this sure proved to be a good decision. Why? Well I was asking the owner about getting some dill for some banana pepper pickling that I’ve been thinking of doing and after talking to him, he mentioned that he has bees. SCORE! Of course I asked if I could see them and he said sure. He had a Ranger that we could ride in and after making somewhat friends with the dog that was sitting on the spot that I wanted – we were off. We went around the farm and then he jumped off to open the gate to the next field. The bee hives were down by some trees and to say that it was Awesome is such an understatement! He told me all the things that he did wrong and what worked well. 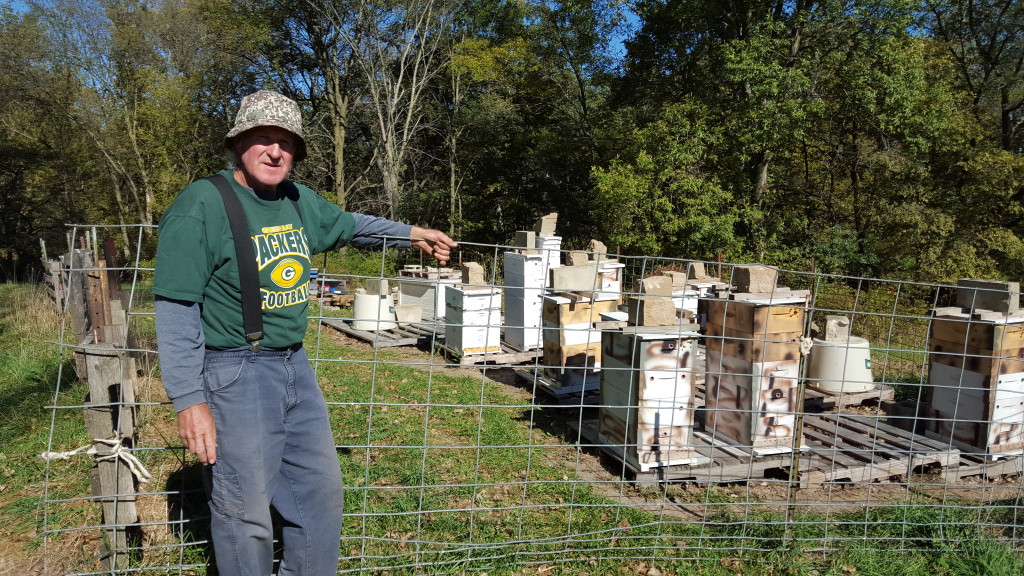 He also said that I could call him if I ever got some hives and that he would love to help me. Did I already say it was Awesome!! Since I was so off track with my schedule today, I hung out with this owner for more time that I was originally thinking. He talked to me how he feeds the bees at the end of fall to get them and the hives ready for the winter and how you have to be careful so the bees don’t drown when eating the sweet syrup. 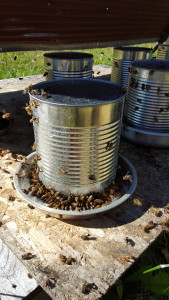 And then we jumped back on the Ranger and through the yard and back up to the highway we went.  He was very nice and I sure enjoyed my visit with him.

Now I was headed to my Mom’s and to see what’s new in her neighborhood. Because I spent more time that I had planned just kinda driving around and checking out bee hives, Ma had some good maidrites cooking on the stove and packed up a couple for Daryl for dinner while he was in the field. Thank goodness for Mom’s right? I’ll drop them off for him before I get home. 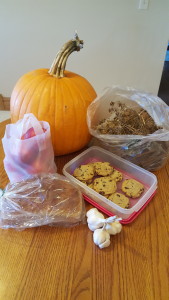 When I finally got home I had to smile. I mean not too often when you go to the Post Office do you come home with pumpkins, lefse, garlic, wheat/sunflower/oatmeal homemade bread, dill, apples, maidrites, and then I even accidentally grabbed a container from Ma’s kitchen that was filled with cookies. Honestly, it was really an accident!

And how did I spend the rest of the afternoon? I kept the dehydrator going with the next batch of tomato/vegetable puree from the last tomato juice. I also had a chance to make the next batch of soap – Screaming Peacocks while Daryl kept working on combining corn. 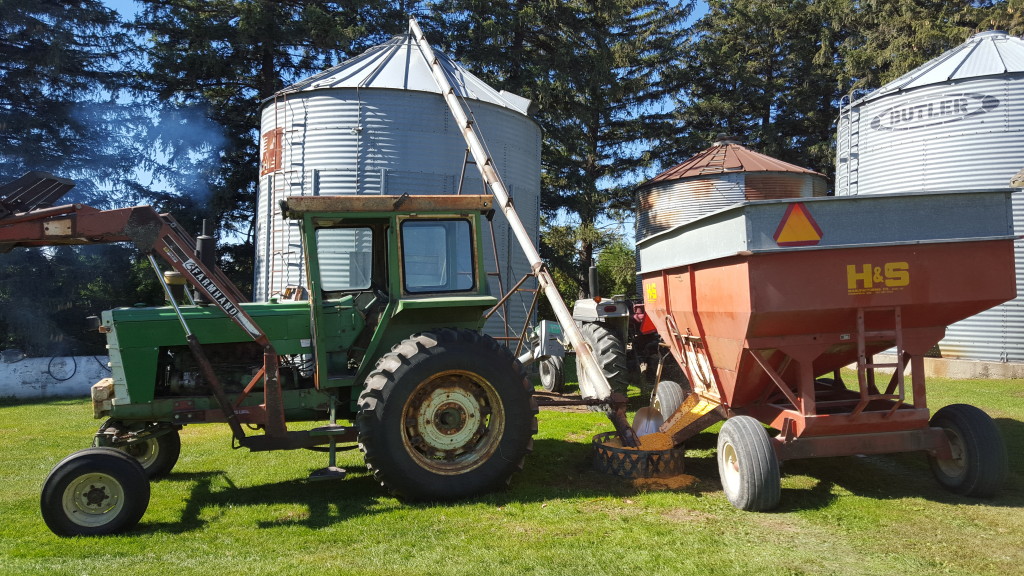 Yup, some days you just have to throw the ‘To do’ list away!

This entry was posted in Farming, Gardening. Bookmark the permalink.