Since I don’t have a garden this year and when I heard that some kids had set up a vegetable stand in town, well I’m going!

The story was that their mom had too much in her garden and some of it might be coming from their grandfather’s garden, but whatever the case I’m telling you it was awesome!

I’ve seem some pictures of 5 little girls standing behind the cash register on some social media, but today there was only one girl behind the stand selling. Now there was more girls in the area but they were ripping it up with some electric Barbie car and wasn’t too interested in selling much of anything that day. And don’t think that these girls are out here by themselves, they have their Mom close by to help with any questions that might come up.

So today I headed there on my lunch hour and it was even more fun than I was expecting. I wasn’t for sure where it was in town, but with heading in the right direction I knew that I had found the stand as I turned the corner. See the stand was built by their grandfather and it not only had a great curb appeal, but there was a bunch of other customers out front. I had even gotten a tour of the backside of the stand and with stools and extra storage space in the back, along with a built in cash box, I’m thinking that this grandfather really kicked it up a notch when he had these little granddaughters in mind!

Well once I got to the stand I wasn’t sure what I was going to buy, but I knew that I better make it worth these kids time! So I bought some tomatoes and into the bag they went. Then they asked if I needed anything else? OK, I looked around and bought some peppers. Into the bag the peppers went. Now what should I buy? Well I bought some pickles and cabbage and a huge bag of green beans.

And when I got back to work and told a coworker what I bought she was wondering what I was going to make with all those vegetables? Seriously, I had no idea but I knew that these kids were pretty excited to make a sale and were really cute and I guess I just got carried away!

Just take a look at the stand and the girl who’s selling the items for the day and tell me you wouldn’t just pick one of everything up too! 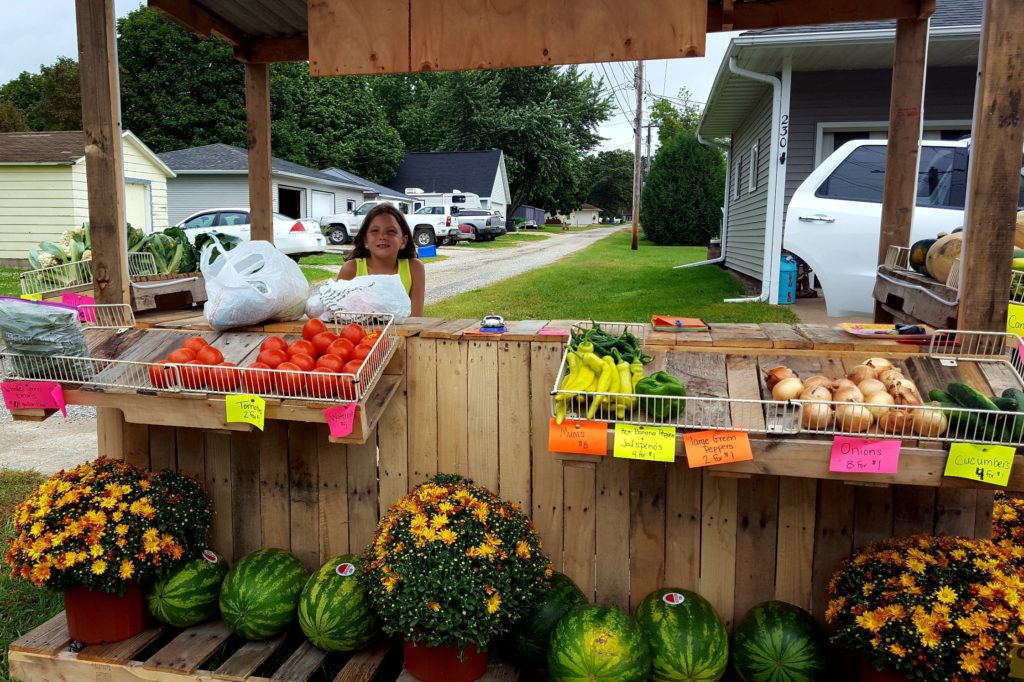 This entry was posted in Community, Gardening. Bookmark the permalink.