I’m really close to being ready for Saturday’s baby shower  and it’s a good feeling. I still have a couple of things to do, but they aren’t going to be too bad so that’s good.

What have I done so far? Well the first thing that I worked on was to ask both Kyle and William to let me know what is their favorite picture and then I made an enlargement and mod podged it to a large matting. Well of course when I picked up the matting it was the wrong size, so a mad dash to Waterloo and I finally had the correct one. But I don’t know if it’s the less expensive matting or what, but I’m having trouble with getting the photo’s to lay down flat. So after redoing both of William’s pictures twice, I am going to have to figure out a different way to keep the photo’s flat before they get hung. The next thing was to clean up some of the flower beds and put some mulch down. 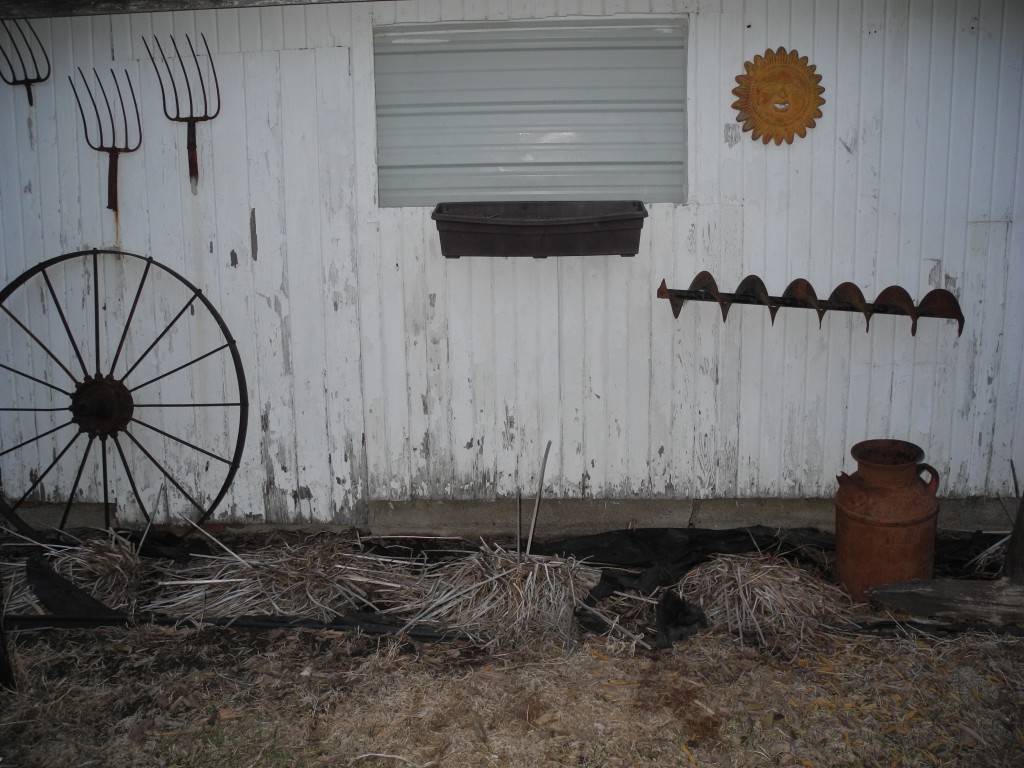 Before picture of the old milk house flower bed 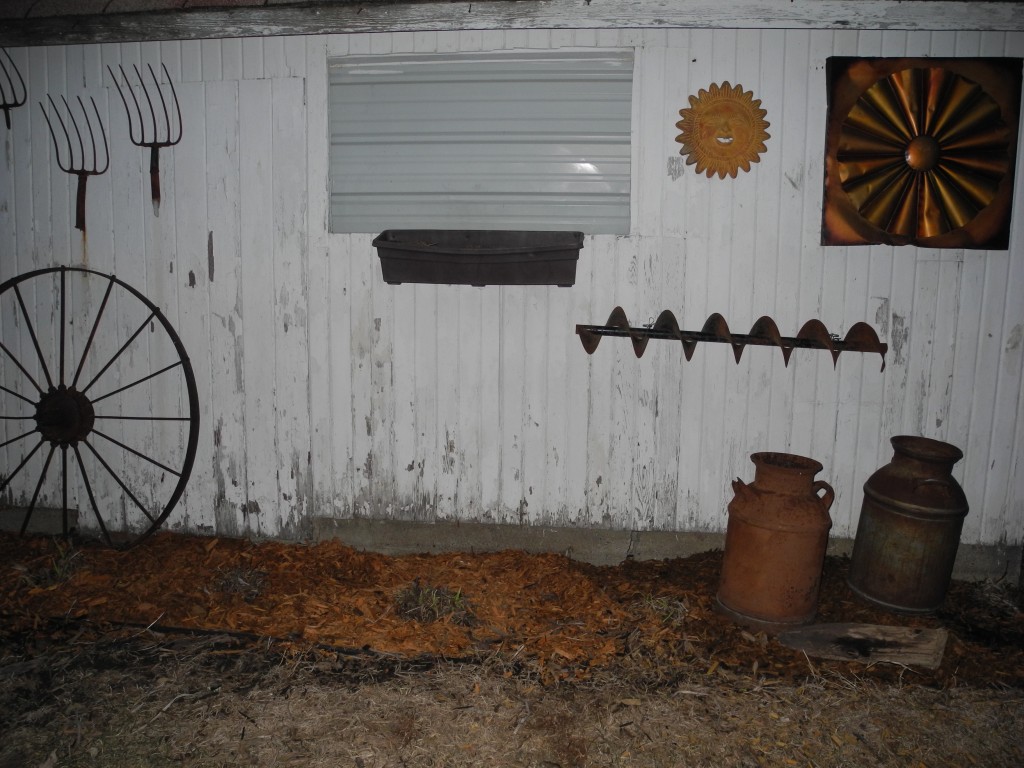 After picture. It would look so much better with the building repainted and flowers – but it’s the best I can do for now

Now the area by the old milk house doesn’t get too scattered by the chickens, but man they go to town by the Roadhouse. But I got it cleaned up and that was another good job done! I ended up having to literally sweep the grass to try to get all the mulch in one area. I guess I could have used a rake , but if you want the truth.. I was too lazy to try to find one. This winter has taken a toll on William’s greenhouse so I quick put some of the panels back on it. I have to get that back into shape because soon I want to use it to start the garden seeds. Well, I hope anyway!  After I drug out some of the lawn chairs to let the rain clean off some of the winter dirt, I went inside to work on making sure that there is enough seating. Another table and a few more chairs and I think I’m good. I decided to put down brown craft paper on the tables and then stamped them with baby stamps instead of the usual table clothes. I’m trying to stay with the brown and blue theme you see. A couple of baby things hung on the wall and a Congratulations poster is also up now. I’ve got the serving tables all set and the gift table looks also really nice. The last thing on my list for the Roadhouse tonight was to reupholster this one rocking chair that I got at a garage sale about a month ago. I think I paid only $15 for it and it doesn’t need that much work to get it back into shape again. 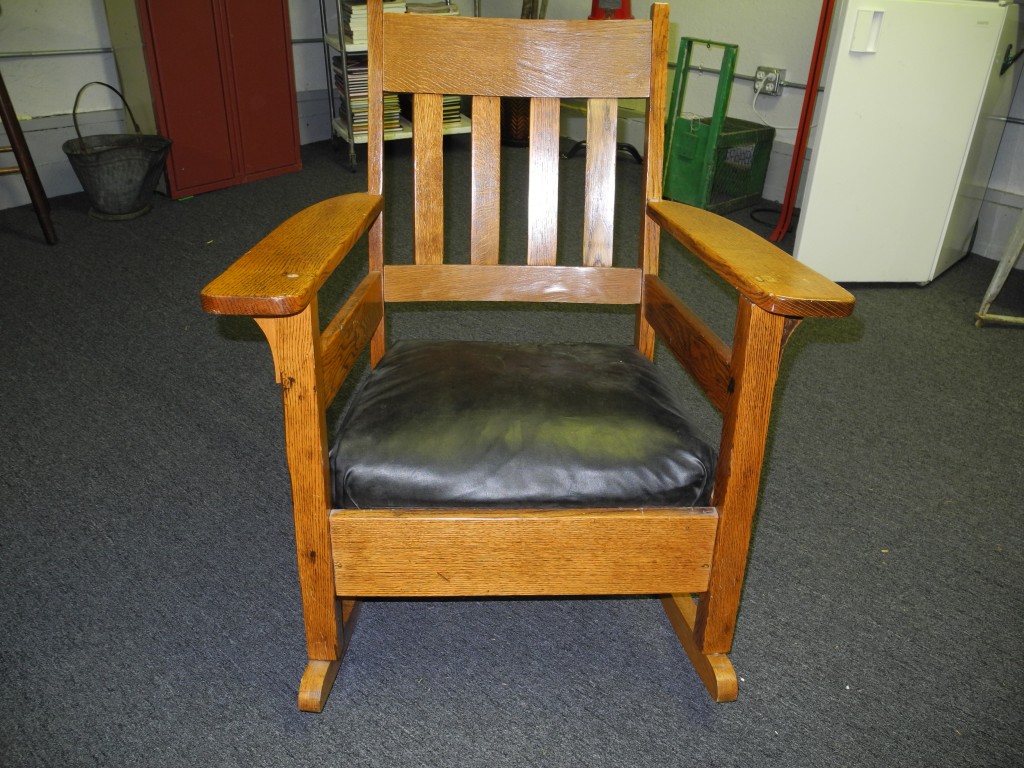 I had some extra upholstery material left over so it wasn’t a bad job and better yet it didn’t take too long either! But I was trying to figure out where all the straw was coming from around the chair when I first started to take it apart. Then I saw that the chair must really be old! The cushion is stuffed with straw. 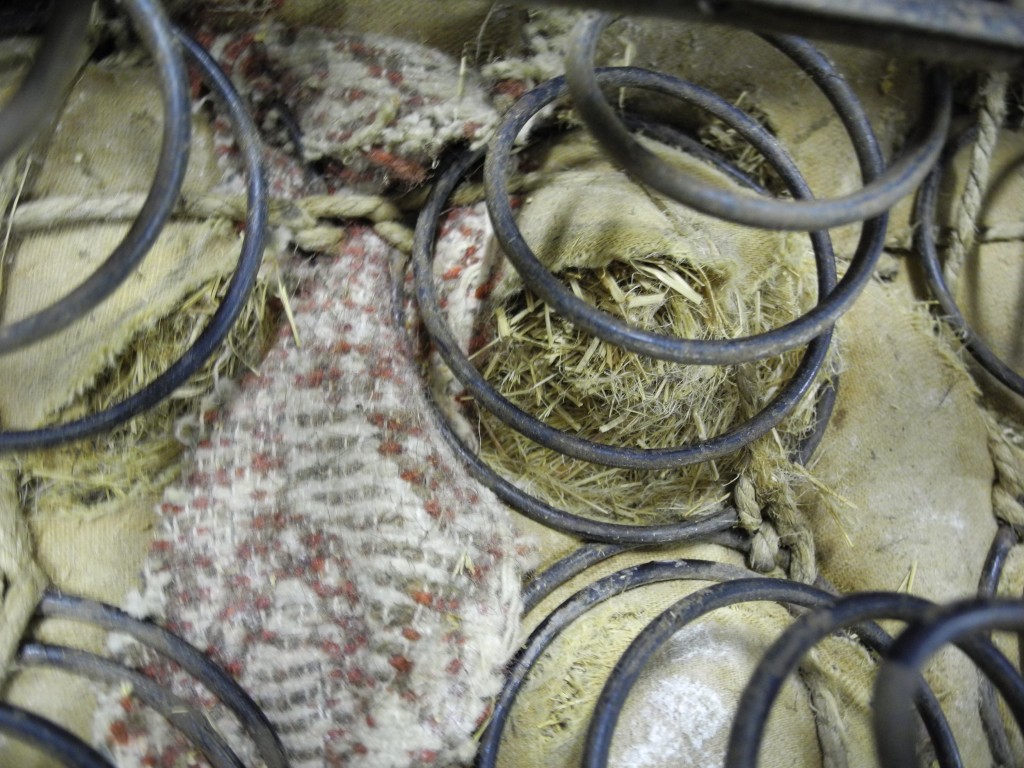 I was trying to find out when they actually used straw and the article that I saw on the web was in the 1920’s.  All I know is that it’s leaking straw for now but it looks good. 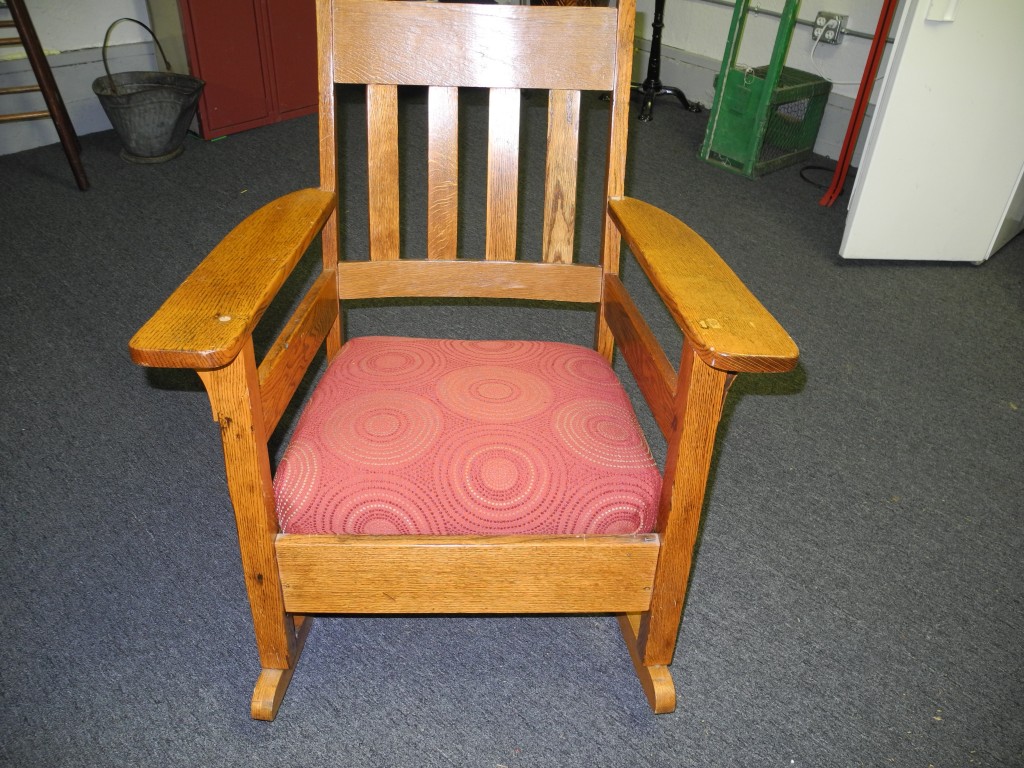 So all we have left is to make sure that the house is in good shape and vacuum the Roadhouse. And how does the new puppy spend his nights? Well, he’s learning from the experts. 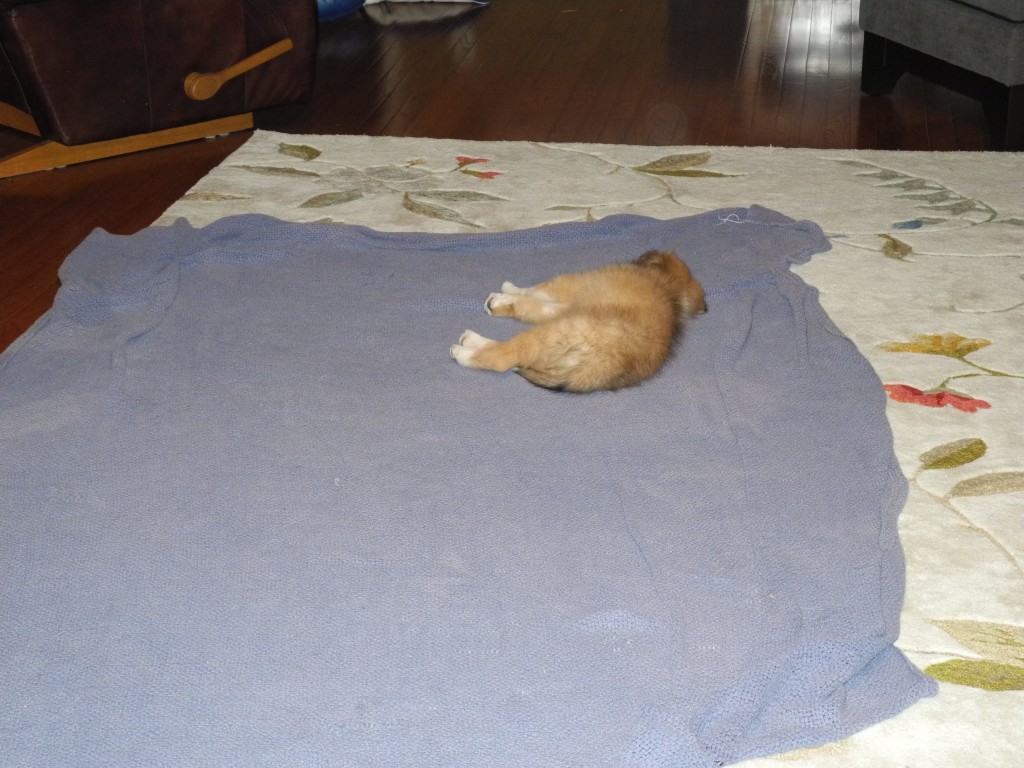 The photo of the day is a picture of the eggs that Daryl picked tonight. Our chickens have started to lay again and it’s so nice to have fresh eggs! 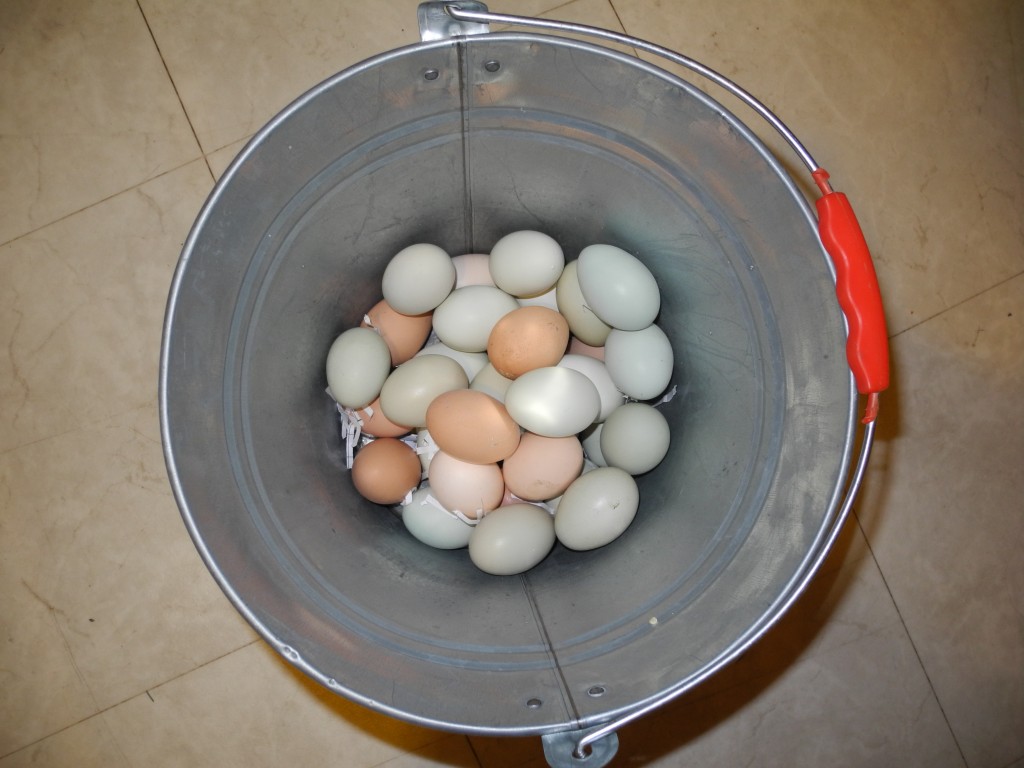 This entry was posted in Picture of the day, Roadhouse. Bookmark the permalink.