Have you ever done something and then wonder if you really should have done that?

Well that’s what I’m thinking about something that I did tonight.

Tonight I took the plunge and have organized an Open House for my soap business in our local town. YIKES!

Seriously, I’ve never done anything like this before! But when I stopped and thought of what was the worst thing that could happen, all I could come up with is that I’d lose my hall deposit. And how bad is it to lose $40? Really not that bad.

And I’m not sure how much soap that I have for both this Open House and the Christmas season,  but take my word for it – it’s a LOT! I ran out of room on my shelves in the laundry room and have now started to take over the counter space in the kitchen. I can even smell the soap in the house these past few days so you know that it’s got to be pretty smelly in our house!

With all the soap curing for the Open House, I’m starting to work on some lotions and new bath bombs & scrubs. I’ve got a couple of weeks to have everything ready so I’m kind of sitting good right now.

So I wanted to make my last loaf of soap one that I’ve never made before and I decided on a soap that has a lot of nice oils in it and also some cocoa butter to make the soap nice and moisturizing. And it also has some egg yolks in it. Yup, you heard me right – EGGS!! The eggs are supposed to make a nice rich lather. Weird huh?  I guess we’ll just have to wait and see if that’s true. What you have to do when you are making this soap is to get the liquids really at a low temperature and then slowly add the oils to the egg yolks to temper them before you add them to the final mixture to be blended. This soap is quite a concoction if I say so myself. See the chocolate balls on top and the brown soap in the bars are made with soap and some cocoa out of the kitchen cupboard to make it brown. Daryl was eye spying them on the table before I put them on the soap and I was afraid he was going to eat them. He was wondering if they were malted milk balls.I guess they do kind of look like that and it’s a good thing I was in the kitchen when he was there or I’m afraid he was going to have a soapy snack that he wouldn’t have liked too much!

Well I wanted to try something that I’ve never done before and I think I was successful in doing just that tonight! And just look how nice the soap looks. It looks good enough to eat. 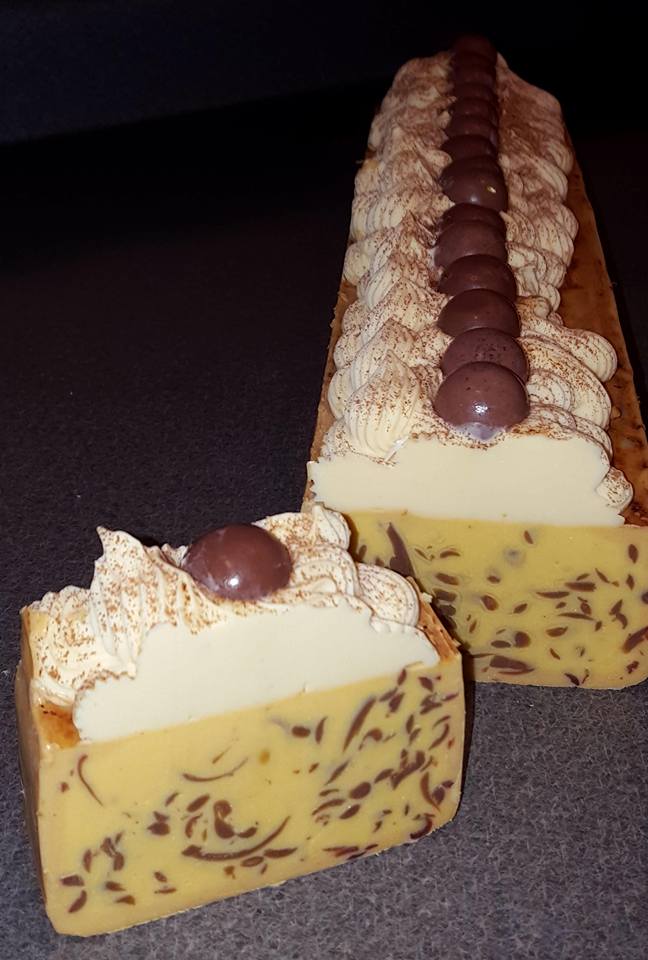 4 Responses to Open House for soap