Sunday – corn is done and more painting is going on!

Daryl was able to finish up with the corn tonight! Whooohooo!!

Now you really don’t want to be done because that means that this is the amount that you will be able to sell later. But in my opinion it’s sometimes a good thing because it’s a lot of long hours and hard work,  and you have to be done sometime right?

So like I said, the corn is done and now to start chopping stalks.

And what did I do while Daryl was out in the field today? Well I got up early and started to get some things organized around the house. I’m putting together a vendor display for an upcoming General Store that is happening this coming weekend. I’ll have to deliver my display later this week and I don’t want to forget anything. The best part of this vendor show is that I don’t have to be at the store to sell my soap which is the winning ticket if you ask me. I still have some soap to wrap and then put price tags on everything. It shouldn’t take too long, well I hope not anyway.

So my plan today was not to be in the house any later than 10:00 so I hurried up with my soap stuff and then headed out for the day. Yes, literally the day.

Today was a painting day. If you remember yesterday I had a brand new 5 gallon pail of white paint in the car and I wanted to see how much I could us of it today.

The first stop was the shed that needed a little love. I started with scraping the wood and man it was so hot out that I was just sweating in my short sleeve shirt. So into the house I go and put on a tank top. Well now the bugs come. I had more flies, asian beetles, and wasps by me so back to the house and I doused myself with lavender. OK, that worked and back to painting. Now here comes the No See Ums. (no idea if that’s actually how to spell this bug or if it’s actually the right name) Well I found out that I was good with the lavender for the rest of the bugs but these little guys – didn’t care at all. They were biting me so bad that I had to look if I was getting stung by the wasps! Now back to the house and when I found a can of bug spray I sprayed myself until my skin just glistened. I hate to even use bug spray but in this case – it’s just too bad that I don’t like it because I was being eaten alive.

Well I hurried with my painting on the south side and when I moved to the other side of the shed the bugs weren’t so bad. Whew!

I had such a good and productive day today. I got two sides of the white painted on the first shed, some trim,door and foundation painted on the Roadhouse, the east side of the old milk house painted along with the trim on the north and south sid, I painted one side of a fence, and then I painted our house foundation. The hardest thing to paint is our house foundation. See our house is around 120 (?) years old and most of the foundation is large stones with concrete in between. Yea, not so much fun to paint at all.  But it was a good job done so I’m happy. Sore… but happy.

Now I would like to have one more day to paint a couple more sheds – but I guess we’ll see if that’s going to happen or not this year.

And what am I doing now? Well it’s late and I’ve got my pink reindeer jammies on and I am headed to bed. With being out side almost all day today in the wind – well I’m exhausted. 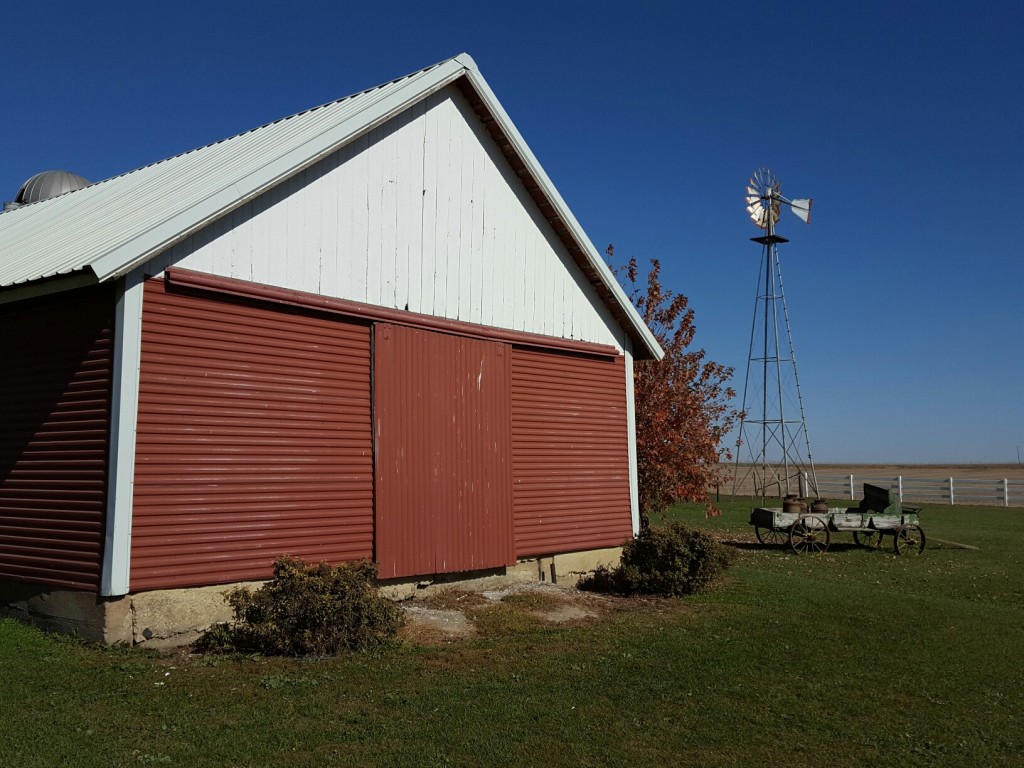 This entry was posted in Farming, Projects completed. Bookmark the permalink.