We had an awesome day today getting things done around the farm.

Daryl worked pretty much all day on getting the cow yard cleaned up and all the manure hauled for the spring. He’s been hauling the manure to the other farm and now that he’s done, the cow yard and shed looks so nice and clean. There’s a fresh corn stalk in the shed and a big round bale in the cow yard. Yup, the cows should be thinking that they’re pretty much in cow heaven about now.

But there is one thing that we found out when Daryl puts a new corn stalk bale in the shed. Ed the bull gets a little goofy. And when I say goofy.. that pretty much sums it up. What Ed does is that he’ll kind of roll around in the corn stalk to break it up and then rutz around until the other cows come in and see just what in the heck is going on. Well Ed doesn’t want anyone near him when he’s enjoying the new bale and will chase everyone away. I was watching him today in the shed and he can’t even stand it if the cows watch him from the other side of the yard. He’ll chase them away so fast! It’s times like this when you know that it’s a good thing to stay very very far away from him. I know he’s cute and everything – but he is pretty big and also he is a farm bull! Oh yea, and he’s also a little goofy! 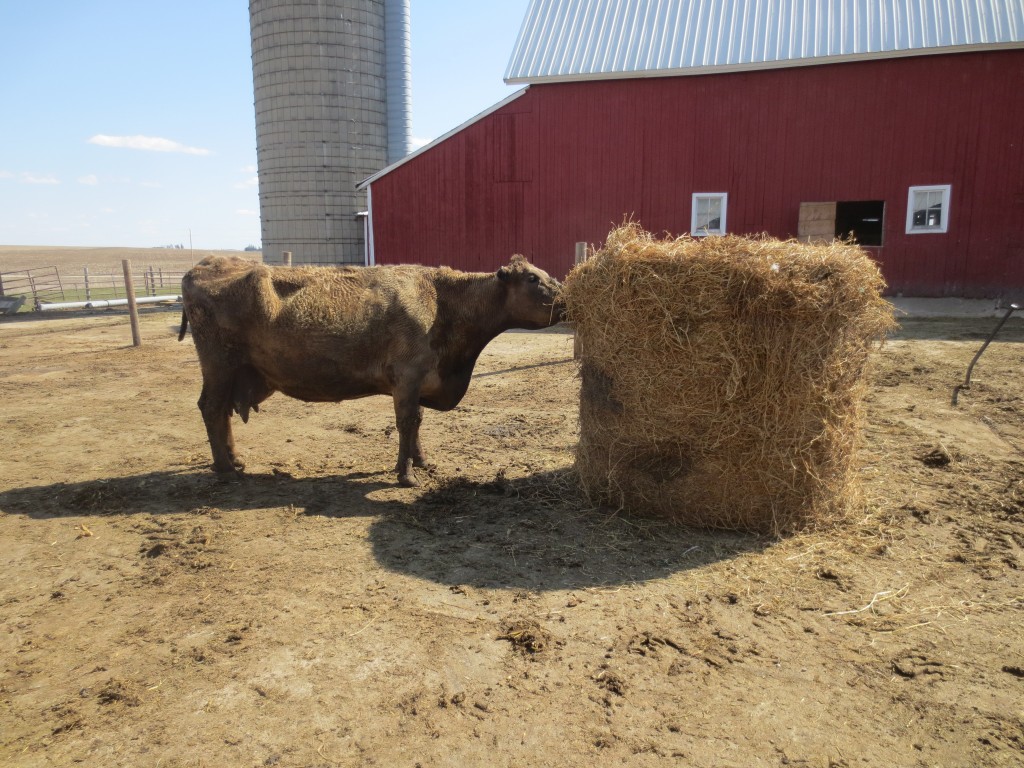 No Ears was first at the new hay bale

Well while Daryl was working on the cow yard, William was still home for the weekend and started to work on making some bean bag games. Some people call them corn bag toss I guess – but it’s the same thing. He used just wood from around the farm and so far they are looking awesome! Now to get them painted with some Iowa State colors on them and then try them out. 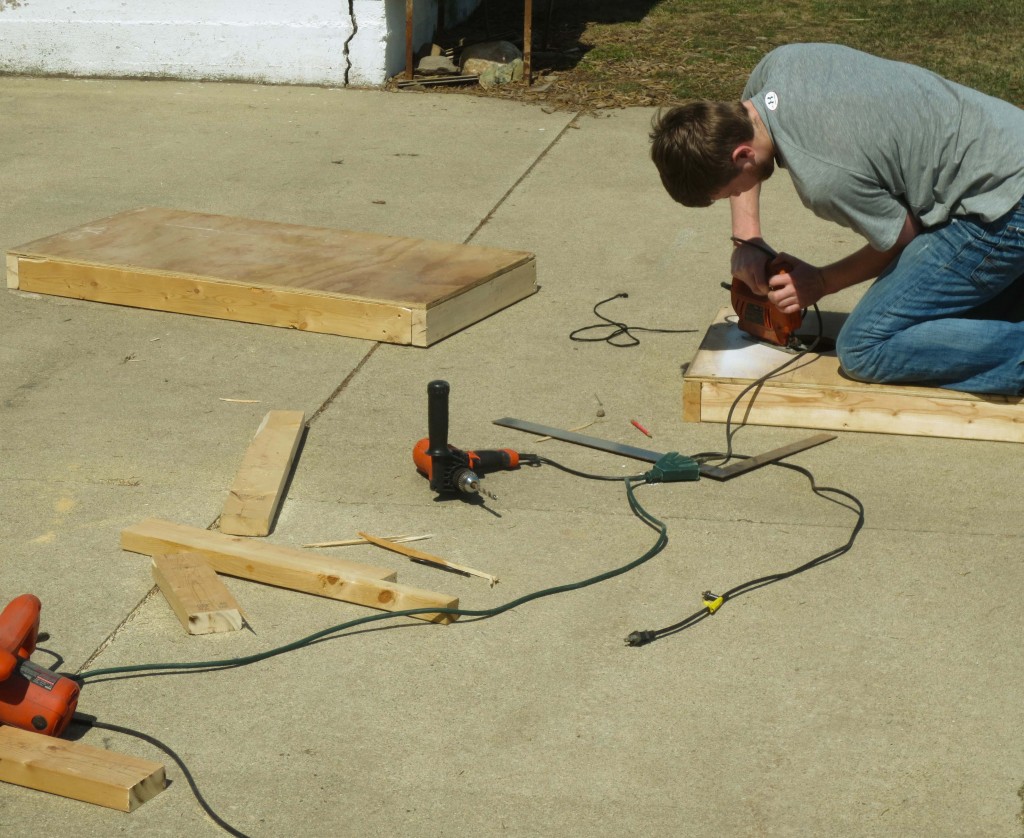 William working hard on the games

And finally what did I do today? Well I worked on laundry in the morning. The weather was absolutely perfect so I was brave and hung them on the clothes line. The last time I hung anything on the line the dogs thought it was a game and pulled the clothes off the line as they swayed in the breeze and played tug of war with them. Guess what? When your dog plays tug of war with your clothes, your clothes get wrecked. I had so many holes in one of my shirts that it looked like I was in one of those horror movies and was slashed to death. But today – so far so good and no dog games at the farm!

I also worked on getting the mulch back where it belongs down by the Roadhouse. For the past couple of years I’ve been saying that I want to get some landscaping block to keep the mulch in and once I got it all cleaned up today – that is what I was going to do. And especially when I was trying to figure out how many blocks that I needed and a whole herd of chickens came by and started to dig the mulch back up and throw it all around again! After I yelled at them and tried to chase them away – they just looked at me and if they could talk I’m positive they would have said something like ‘what’s your problem?’ OK! That’s it!! 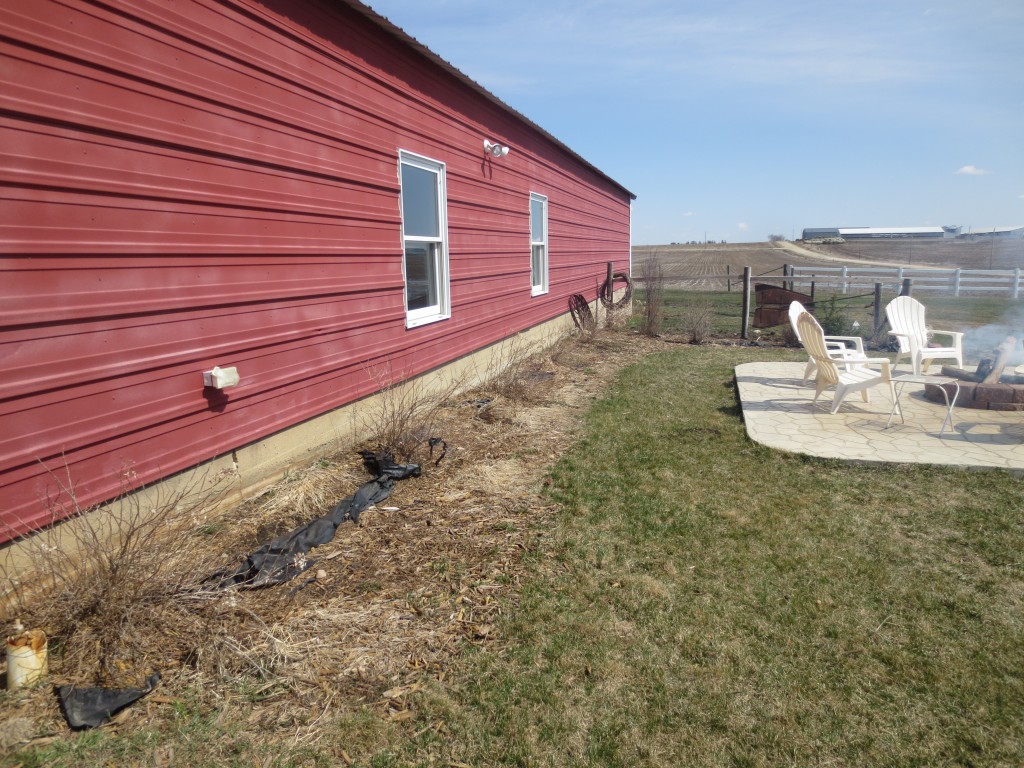 So tonight Daryl and I made a quick run to the Home Store to pick up some landscaping block for the yard. Just as a FYI, when I say a ‘quick run’ it’s about an hour to the store, and hour to get our stuff, and then another hour to get back home. So this run was over 3 hours to get some blocks. Now don’t get me wrong – I don’t want to live in a city, but sometimes picking up something as simple as landscaping block is more of a commitment than anything else. But I think it’ll look pretty good when we’re done but I’m worried that we didn’t buy enough. If it doesn’t rain tomorrow I plan to see just how it’s all going to actually look and to see if we have enough.

And with getting home late from the store, that’s about all she wrote for us tonight. I’m not used to all the fresh air and honestly I’m ready to hit the bed!

This entry was posted in Farm animals, Our dogs, Roadhouse. Bookmark the permalink.