At work I’ve been exchanging recipes with one of my friends and it’s been pretty harmless – well until this new cake recipe that I got this past week. She said that she was having trouble with getting it to be like when her Mom made it and was wondering if she was doing something wrong. I told her that I’d give it a try and see if I could have it turn out. Now normally we’re not big cake eaters, but we would just have to take one for the team this time because I was going to give it try. So I got everything ready, and let’s just say it wasn’t just throwing stuff together, it was going to be a challenge. The reason that I liked the recipe and was excited for it was because it was like an old fashioned recipe. I mean you had to separate the egg yolks from the whites and had to boil water to add the cocoa, you know.. more than just dumping it into a bowl. Well I got the boiled water and cocoa cooling in the fridge and the eggs separated (7 eggs needed for the recipe)  and the egg whites all whipped up with some cream of tarter. Then the sugar and oil was mixed and flour and the rest of the dry ingredients all put in the bowl. Next came the cocoa mixture and by this time it was looking pretty good. But after folding in the egg whites the whole thing just kind of collapsed. Yup, I knew that this isn’t what it was supposed to look like. She said her Mom’s was like an angel food cake and just by looking at how my batter looked, well it wasn’t going to be anything like that! Too late now and into the oven it went. It had to bake for one hour and then at a higher temperature for 10 minutes. I was working on some candy that I needed for Sunday 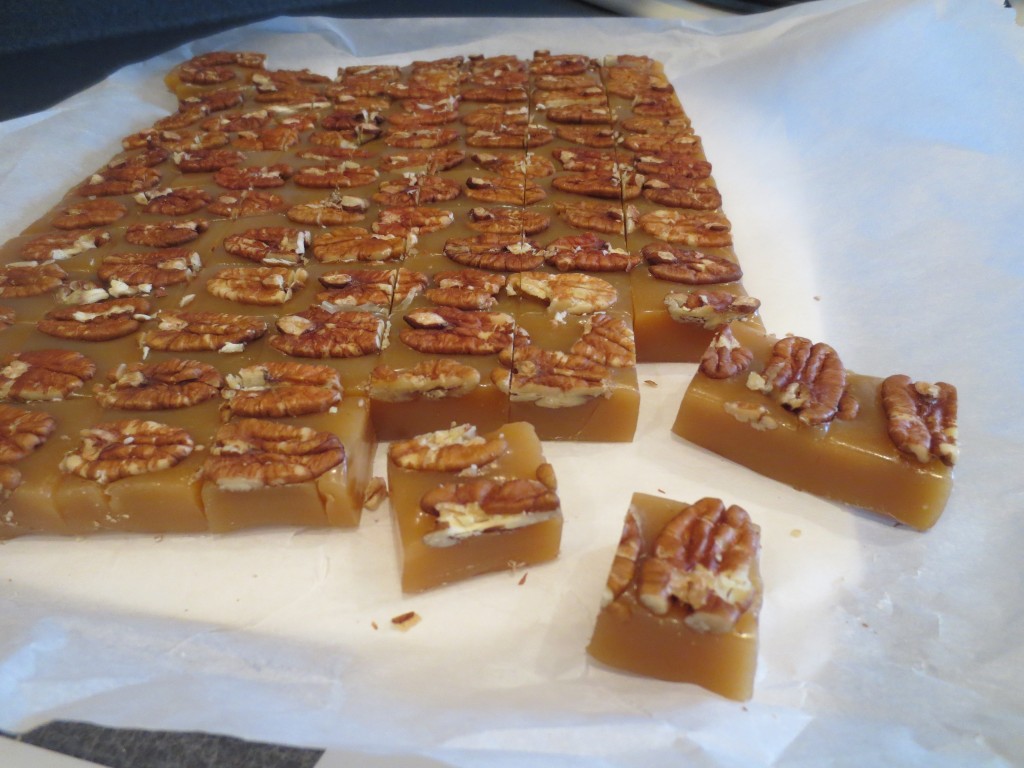 Also on the plan for today – Caramel Pecan Turtles

when all of a sudden you  started to smell burnt batter. You guessed it – out came the cake and it was put upside down on a pop bottle to cool. 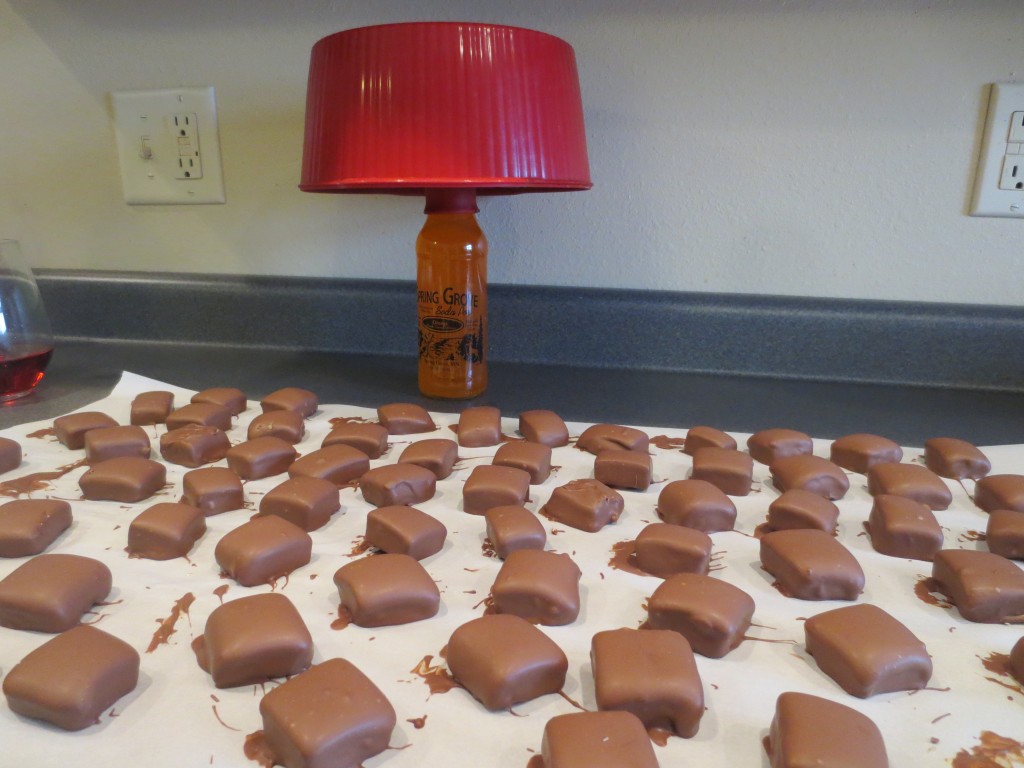 Everything was just chilling out for awhile

It didn’t look so good, but I was way too much into the recipe to quite now! Now to make the frosting. It had milk and flour that you cooked on the stove first and then when that was cool you added it to a Crisco/sugar mixture. While the milk and flour stuff was cooling, I thought the cake looked a little funny in the pan. Yea.. the reason it looked funny was because it FELL out of the cake pan and onto the caramels. So not cool. I tried to put it back in the cake pan, but that was pretty much a very unsuccessful plan. So I got out some cookies racks and set it on there.  OK, now the final touches on the cake. I mixed the flour/milk mixture with the Crisco/sugar mixture and it tasted… absolutely TERRIBLE! It takes like lardy flour. And I had such high hopes for the frosting because my friend said that it was the best part of the cake. Right then and there I knew that I was in trouble. If this was the best part of the cake, wow were we in for a surprise! So I grabbed a couple of cans of bought frosting and frosted the cake up. 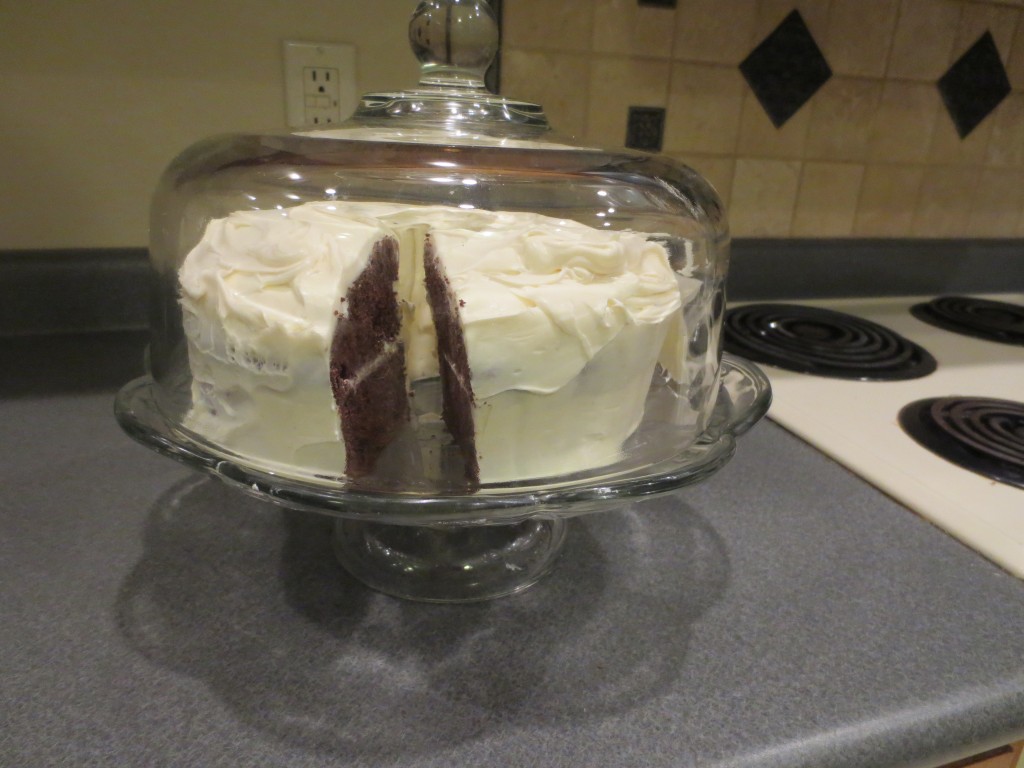 Now the big test, how did it taste? Not good. Really not good at all. I think if my friends Mom was alive she would have cried on how bad it turned out. The bottom of the cake had about a 1/2 inch of really hard batter that formed a crust and the rest was very very dry. The only good thing about the cake was the canned frosting. Needless to say, I’m not planning on sharing the recipe, but I must say that I did share the cake with the chickens 🙂

While I was messing around in the kitchen today, I had some time to try out another new recipe. This one was for… drum roll….. homemade deodorant. Yea, I bet you didn’t see that one coming now did you? Well, I decided to venture out and I had all the ingredients to do it,  so why not? The process is pretty simple. 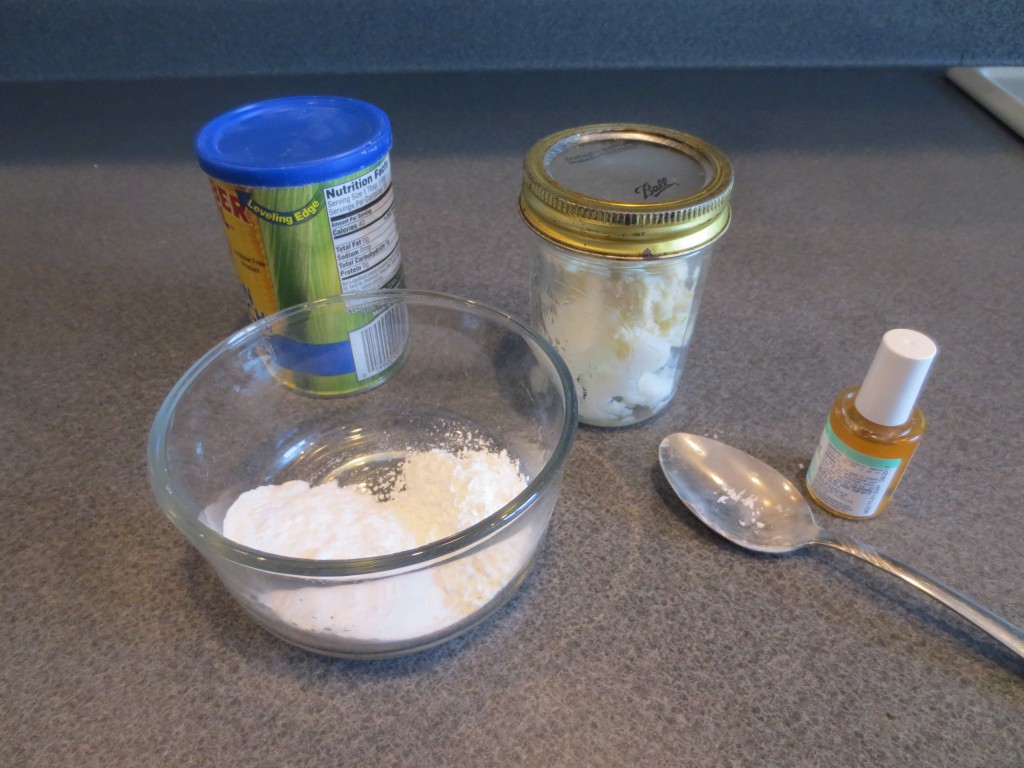 First put all your oils in a mason jar and into boiling water to melt. 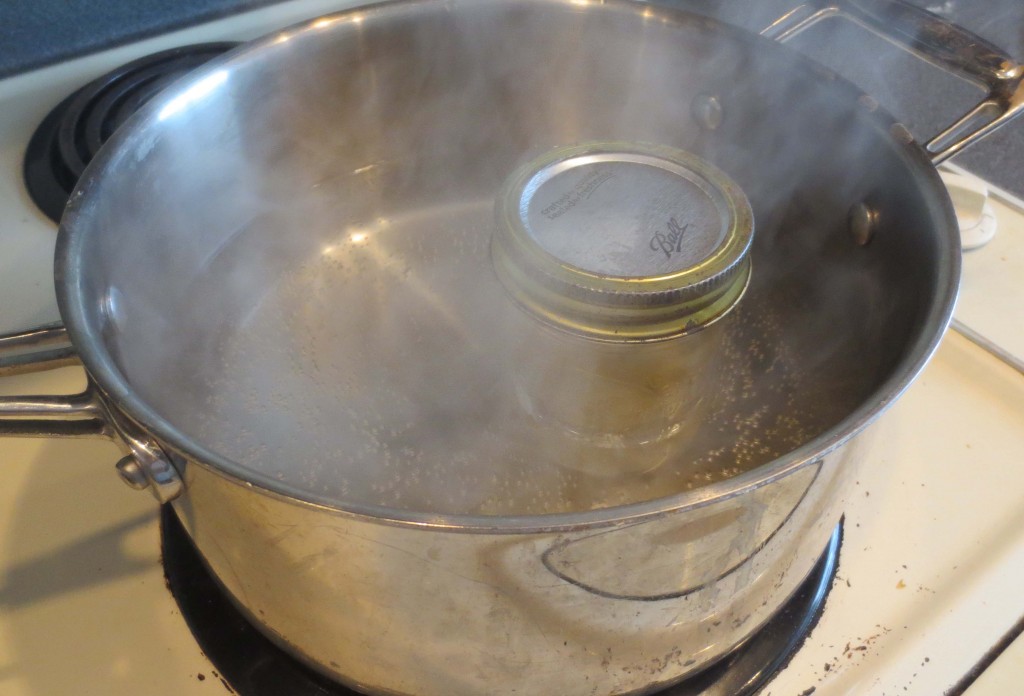 Then add corn starch, baking soda, and some vitamin E into the oils and that’s it. 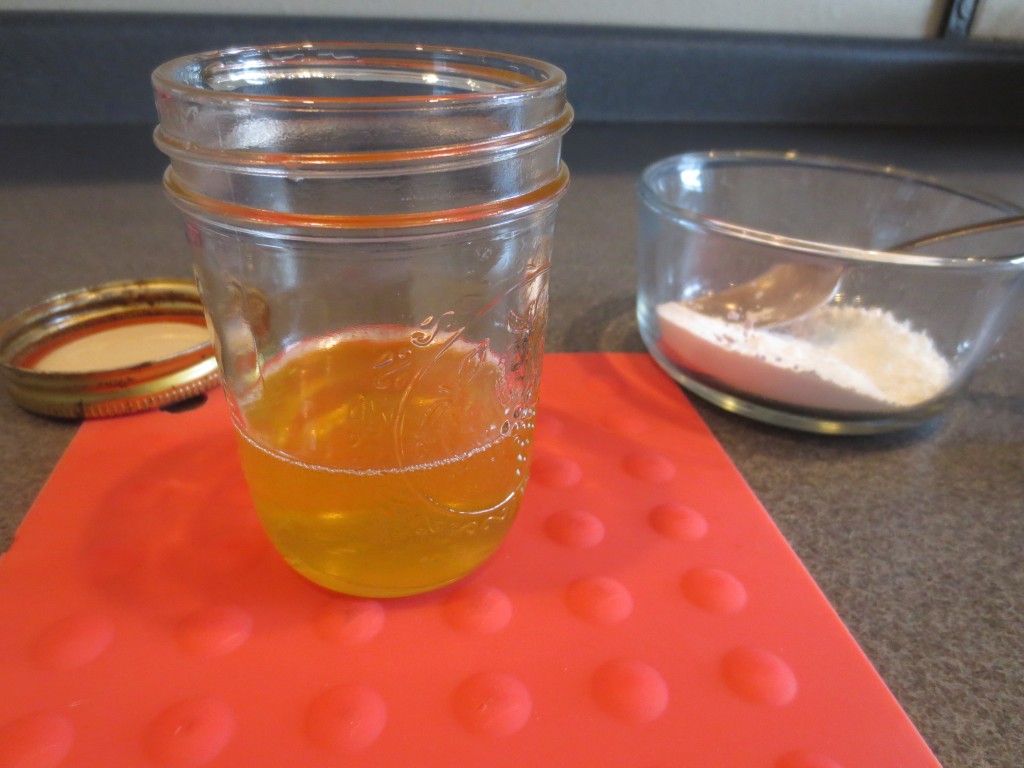 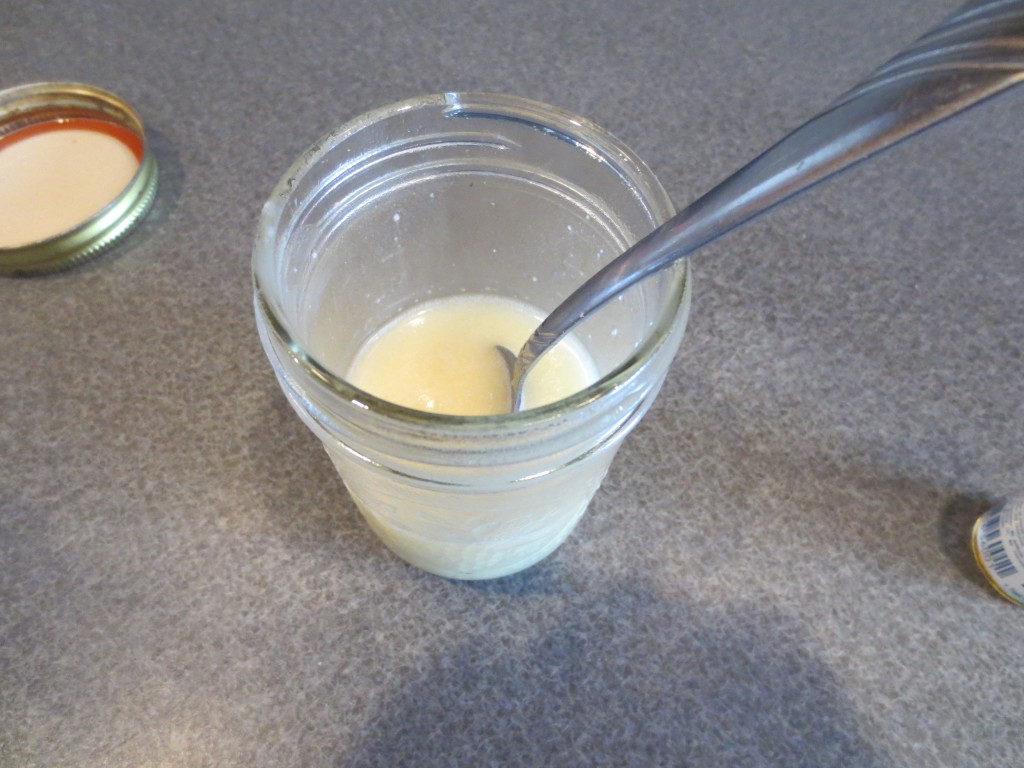 See, it’s pretty simple isn’t it? Now I’m going to give the old arm pits a trial run this week with my new concoction and then I’ll share the recipe with you later if it works. The only thing that I wish that I would have done differently is to use an old deodorant container to put it in. For now it’s still in the jar that I made it in. And even though that will work, I’m going to have to remember which jar has the deodorant and which container has the lip balm 🙂

This entry was posted in Baking, Candy. Bookmark the permalink.