I gave up to the thought that we might still have some nice weather coming our way this fall and started to look outside what was needed to be done. I mean with this being our 3rd or 4th snowfall this year, I guess it’s time to face reality.

So with winter coming, it’s time to move our ‘little’ chickens into the main part of the chicken coop condo. They’ve been locked up since spring and now will need to be mixed with the other chickens for the winter and hopefully by spring when they get left out in the yard that they’ll know not to freak out and fly away.

I like to try to set a timeline for any projects that I do, so this should only take maybe 20 minutes right? Yeah I know that there is over 30 chickens to catch and move, but with my handy dandy chicken catcher – I just might get this done sooner!

When I was walking over to the chicken coop, I had both dogs by my side just wondering what in the world was going on now! But as the chickens were literally screaming and flying past my head from one side of the coop to the other side as I was trying to catch the first chickens (who knew it was so big in there!) the dogs who were patiently sitting outside the door were starting to look a little worried.

Finally, the first one caught. I’m not an expert in setting accurate timeline goals, but after about 5 minutes and only one chicken now screaming on the top of her lungs as she was upside down and moving to the other shed, I’m guessing that 20 minutes is an unrealistic goal 🙂

So out the door, step outside and close the door, past the dogs, open the other side door, and let the chicken in. Yup, this is definitely going to take longer than I had expected.

Back to the other side of the coop and let’s start this over again.

By this time the chickens were totally FREAKED out. I think they remember the whole Cornish chickens episode when those chickens were only there for 8 weeks and then were caught and disappeared for life!

So I thought let’s try to slow everyone down and pick out an easy one. And guess who it was? Bernie the duck! Bernie was tucked away in the corner and was totally exhausted. Ducks have pretty short legs and Bernie is a little weight challenged too, so he’s got a double whammy on any plans of trying to escape. Well Bernie went over to the other side without any issues.

Even though it was taking me forever to catch the chickens, I was able to get a few of them with the chicken catcher hook. But holy cow did they scream! If you were our neighbors I’m guessing that you could hear them across the fields!

When one of the chickens escaped I thought that we’ll just have to be one less. I mean the temperature was going to be <10 degrees tonight and it was dark by now so our friendly fox who lives in field behind us was sure to find her.

Finally with everyone almost exhausted I tried catching the chickens by hand and it went so much better. They weren’t screaming as much either so I guess it was a win/win for both of us.

With everyone tucked away in the coop for the night, I’m guessing it’ll take awhile until they start being nice to each other. For tonight they’re staying on their own perch. 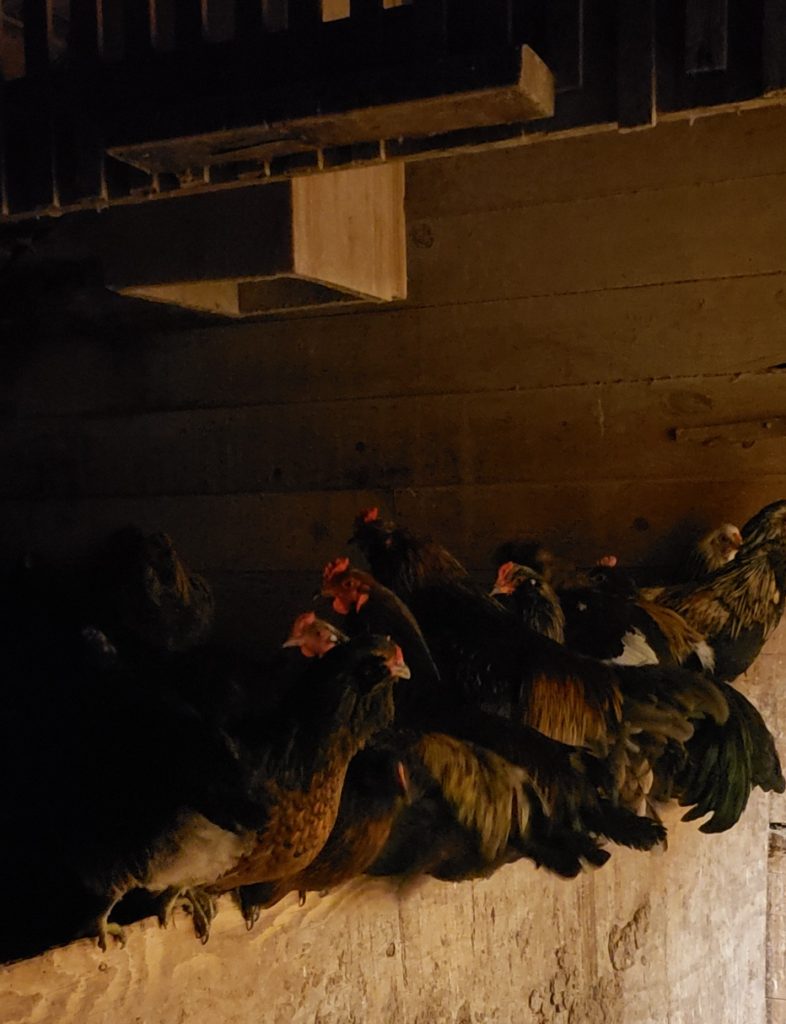 As for Bernie? I just hope he comes out of the corner once in awhile!

*Update on the MIA chicken. Daryl caught him the next day when he found him hiding out in the now empty coop.