We’ve been talking about heading out to New York to see the kids for sometime now and well it was just the right time for us!

We were able to spend last weekend with the kids in Ankeny which we absolutely Loved! And now this weekend we are heading to Albany. 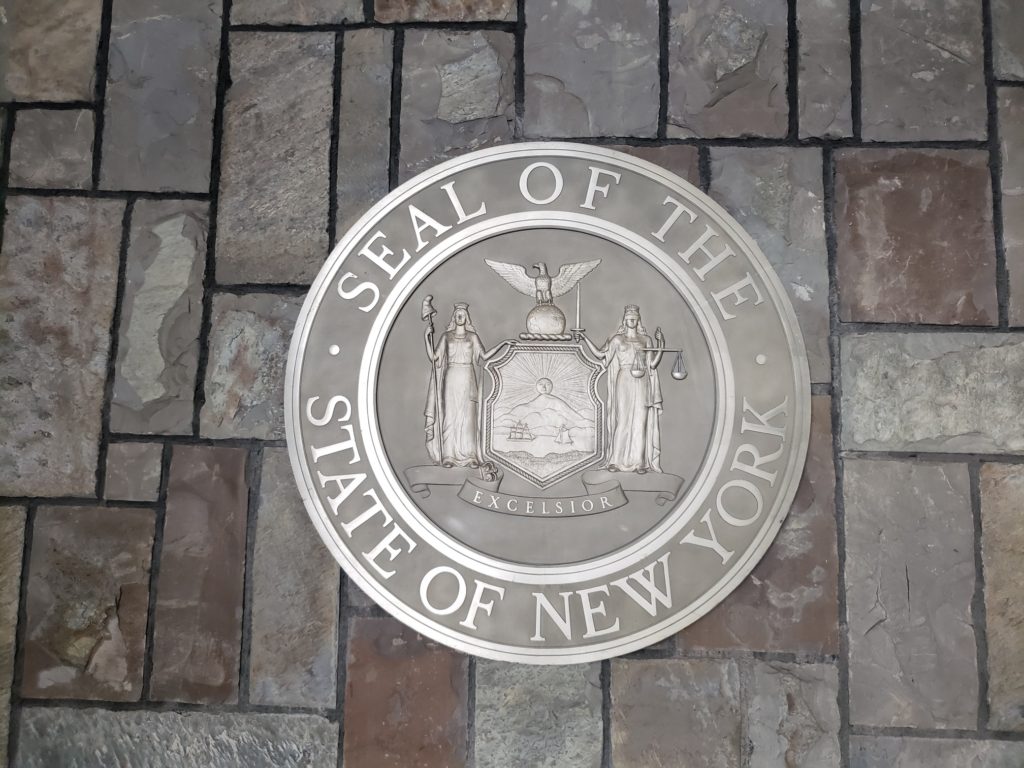 We left on Thursday after work and with a direct flight to the Albany airport, and once we picked up our car we found out that we were we only within 10 minutes away from the kids apartment.

Without a real plan in place from Daryl and I for our time in NY, we ended up sleeping in late and was greeted in the morning with breakfast cooking on the stove for us. I’ll be the first one to admit that we were pretty lazy and just enjoyed the morning.

After a good breakfast we were off for the day. Now one thing that I really didn’t know was what to pack. The weather was in the mid 40’s but the wind was still cold. So with about twice as much as I needed, I was sure to find something to wear that would work. We’ve been to New York City before, but never to the state capital – Albany, so it’ll be fun exploring these next few days! 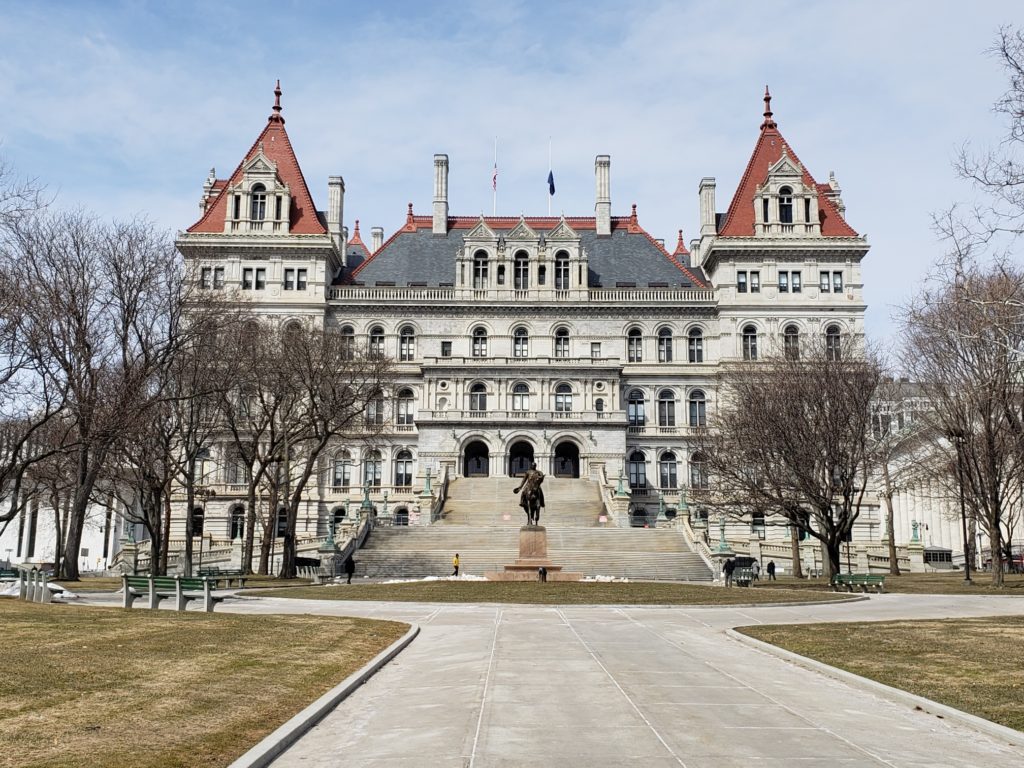 And to say that it was absolutely beautiful is such an understatement! I looked at some of my pictures and it just didn’t capture how cool it was. 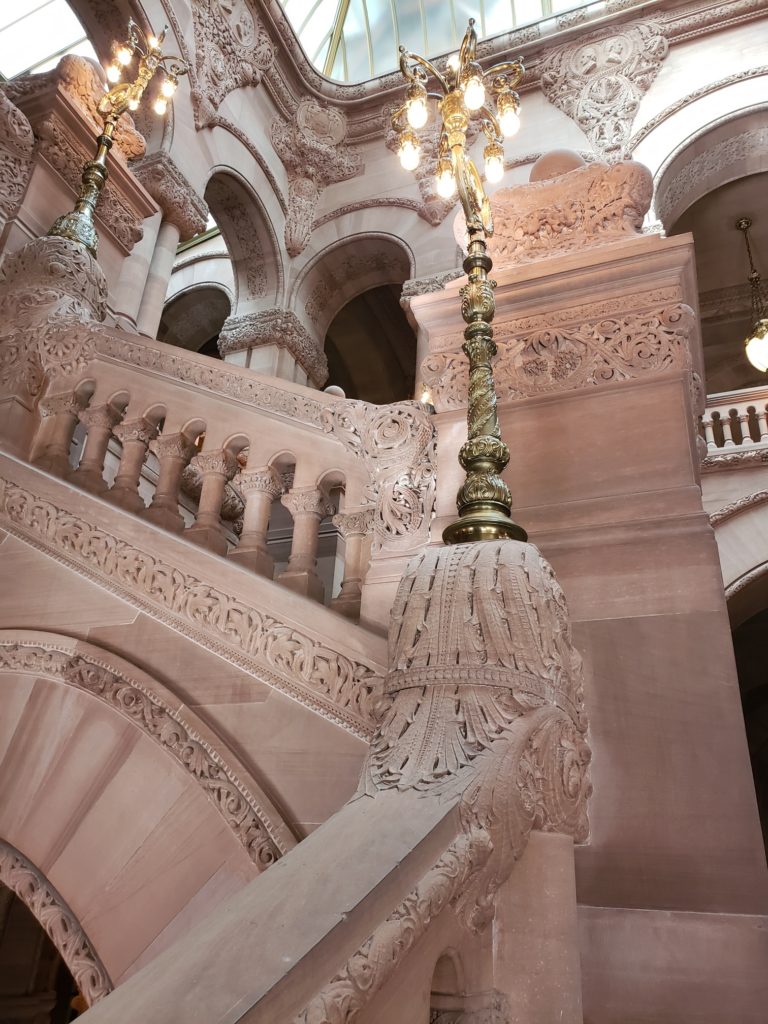 We appreciated Kyle’s knowledge and patience with us while we spent the morning there. 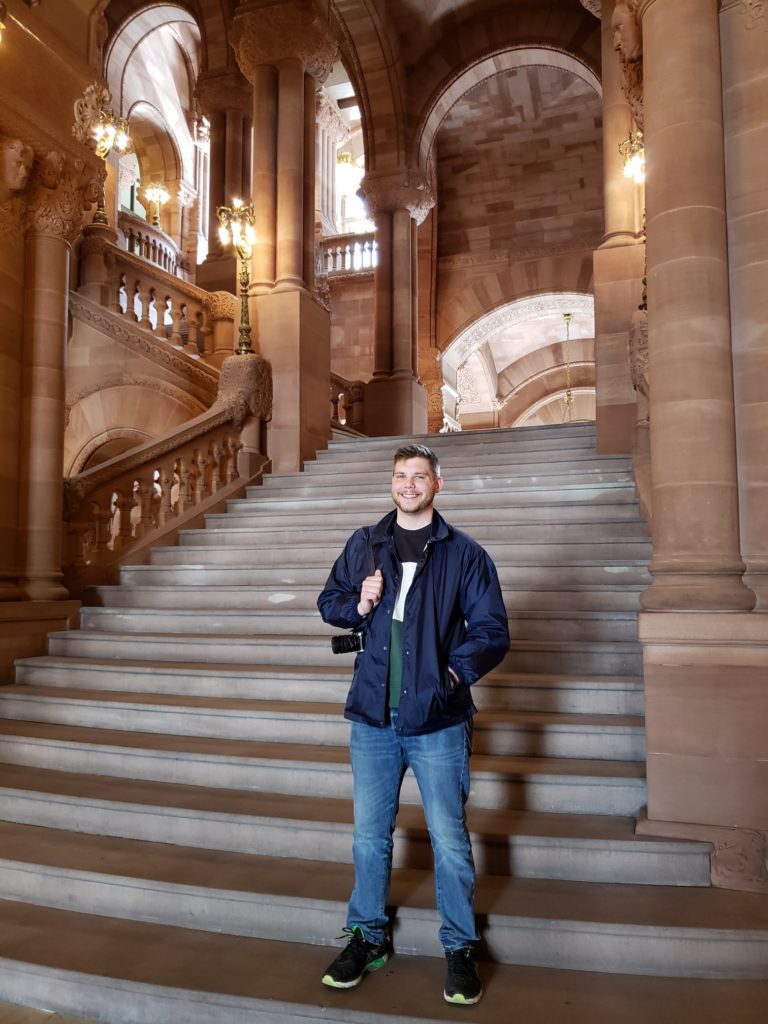 And for this picture below I’m not sure just what was going on! I’m thinking that Daryl was probably messing around again 🙂 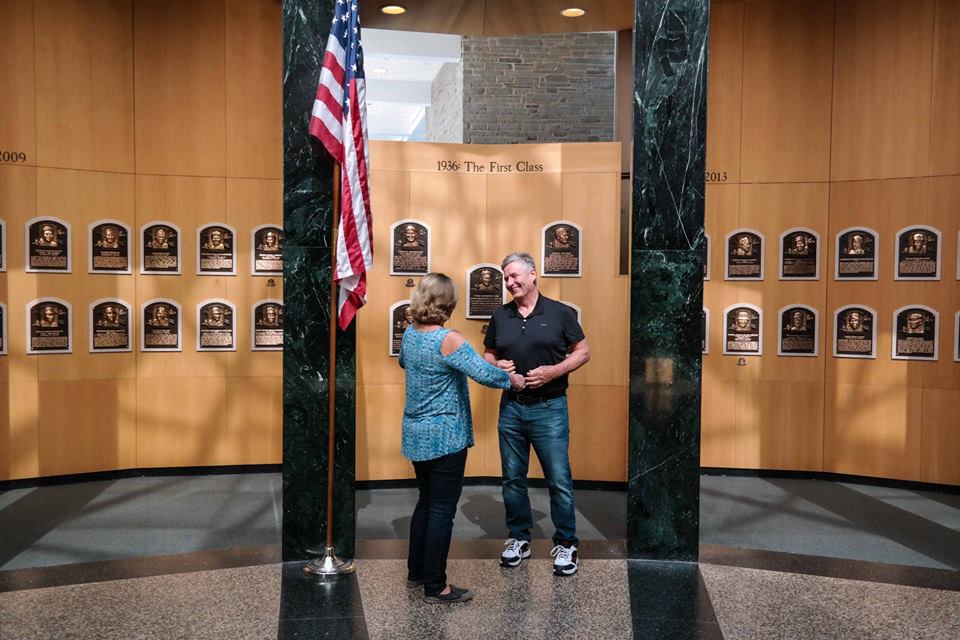 And how funny is this? Have you ever seen a legitimate turtle crossing sign before? 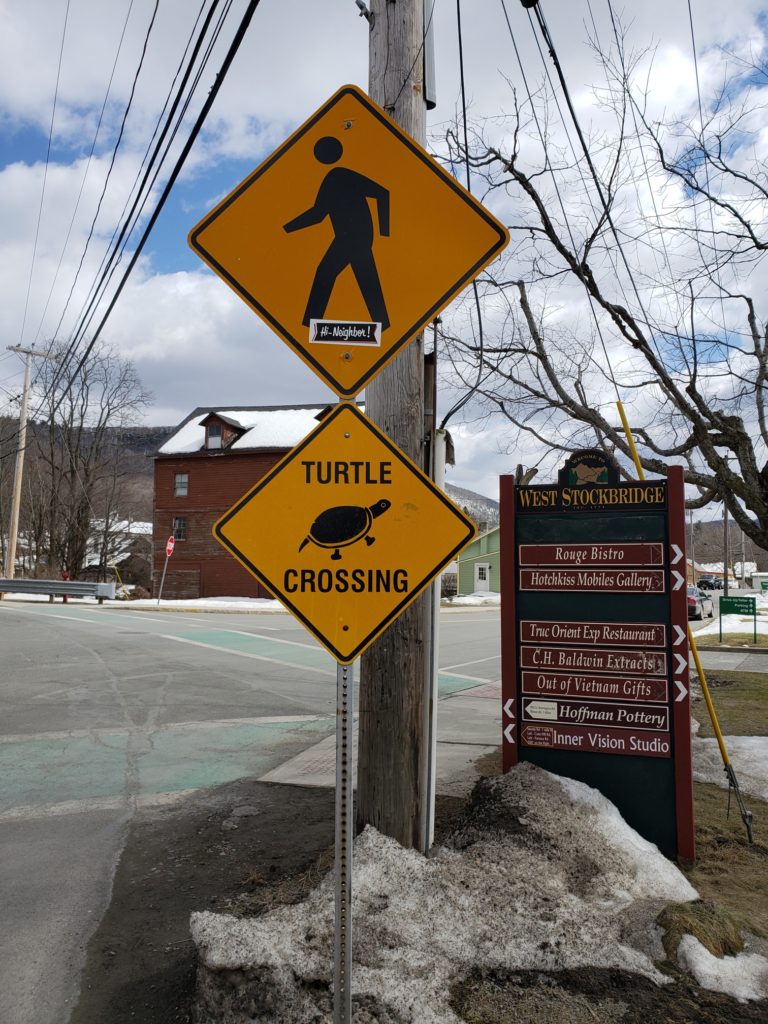 The next stop for today was to find some food and it didn’t take long and within walking distance we found a small pub that served local favorites. And what did I order? Well Poutine of course! When you’re  in New York you eat poutine. 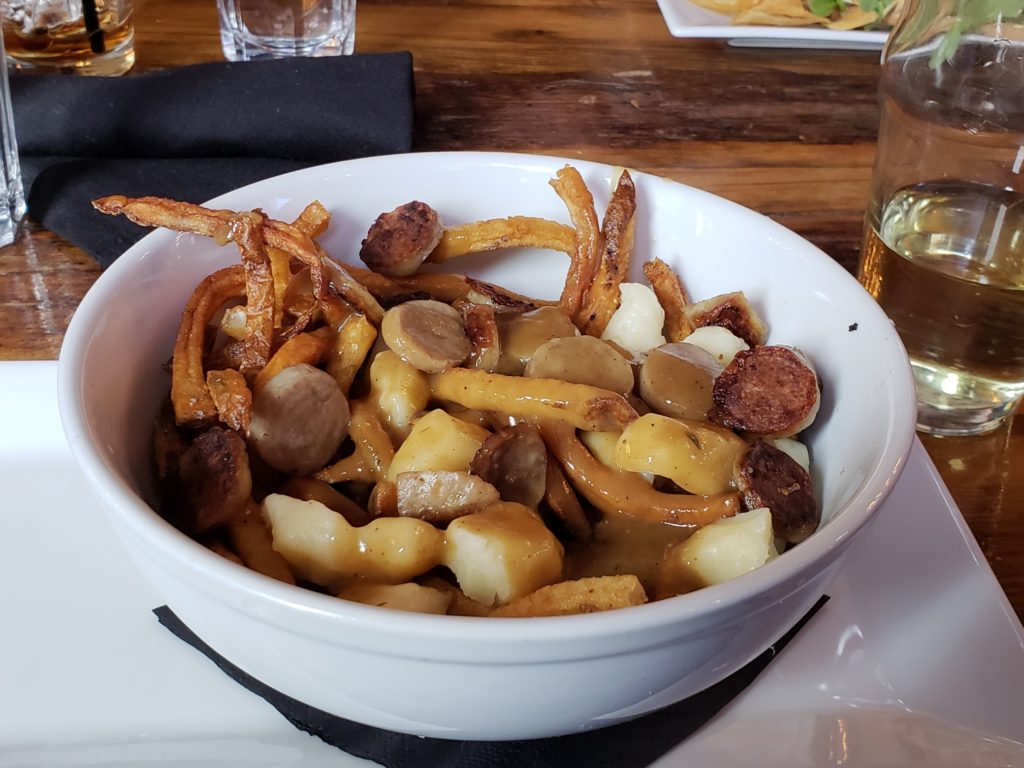 Then we were off to the State Museum which was huge, but the display that had the most impact for me was the 911 display and articles. We were in New York after the attack when they were still working on putting the city back together again, but to see the fire trucks that had gotten wrecked and the wedding rings that they found while sorting out the material in the landfill, it was very moving. 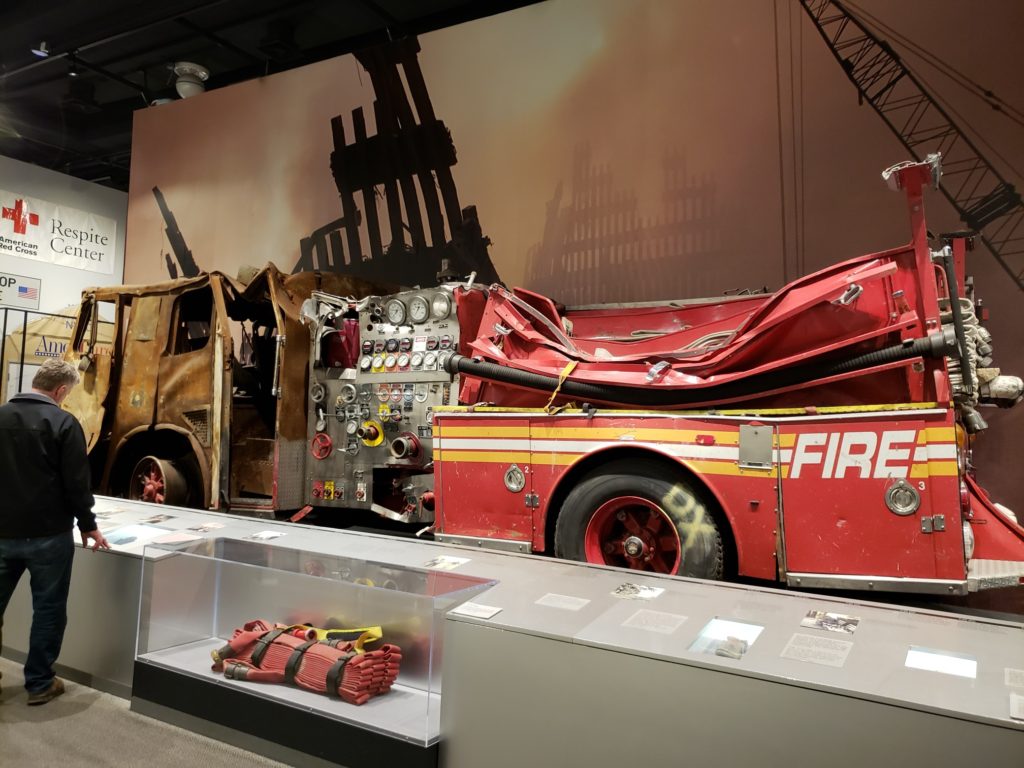 The night was spent heading out for supper with the kids and Kelcie’s folks. And since it was a Friday, our meal for the night was fresh lobster & shrimp mac and cheese. 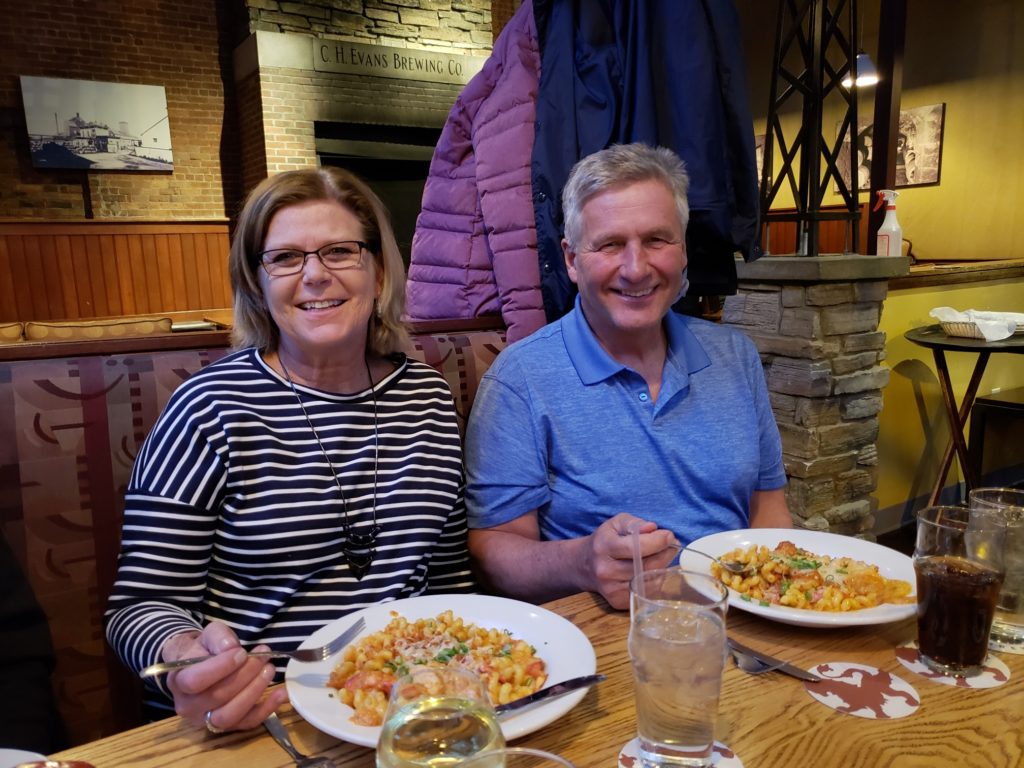 Now it’s not that I missed the fish, but this dish was awesome! Having a great meal with some new friends was a perfect way to send the day!

Saturday’s agenda was to go to the Baseball Hall of Fame in Cooperstown. Saying that Daryl was excited about this day’s plan is probably an understatement! Especially when the first thing that you see when you get there was his favorite team – the Cincinnati Reds. 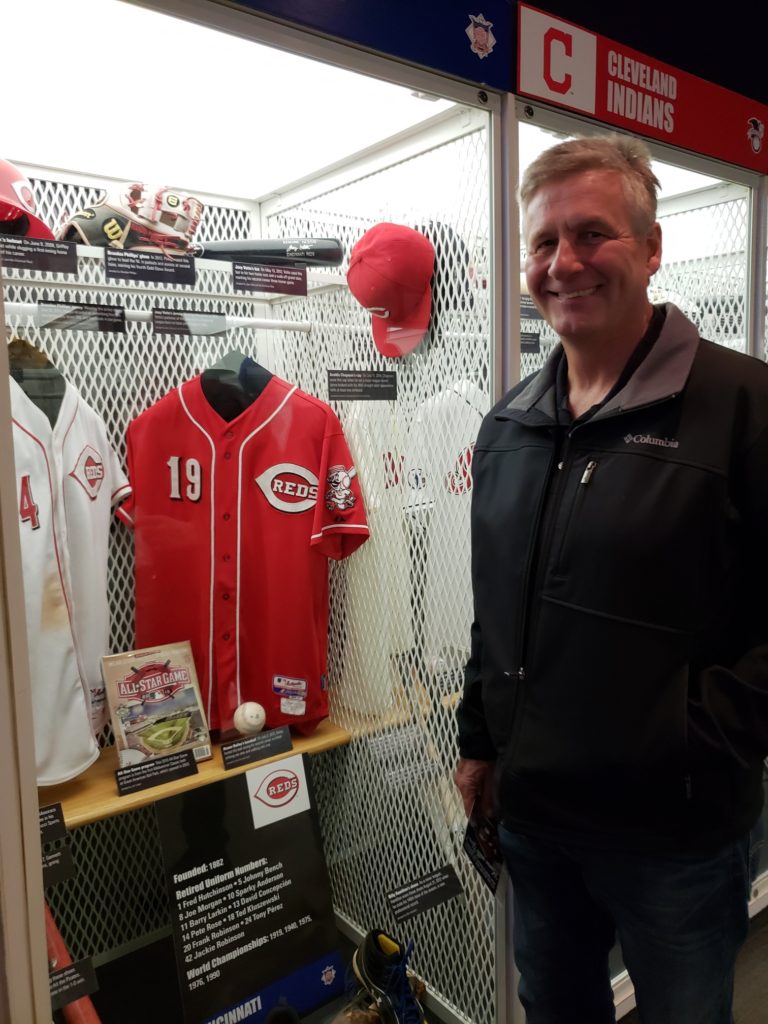 After seeing a lot of other baseball stuff that included Babe Ruth’s uniform and gloves, Kelcie and stopped for a quick picture with a chicken. 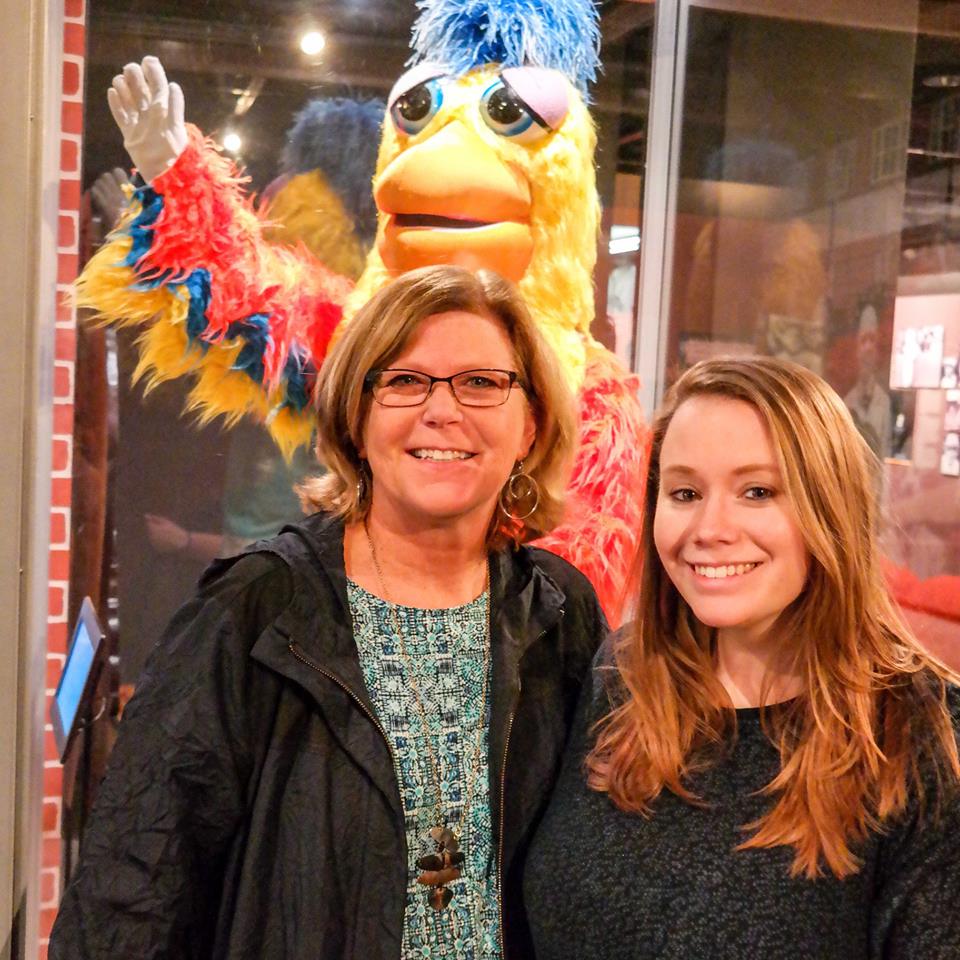 And of course how I can resist this opportunity below? But I think I look more like one of the flying monkeys in The Wizard of Oz than a baseball player don’t you? 🙂 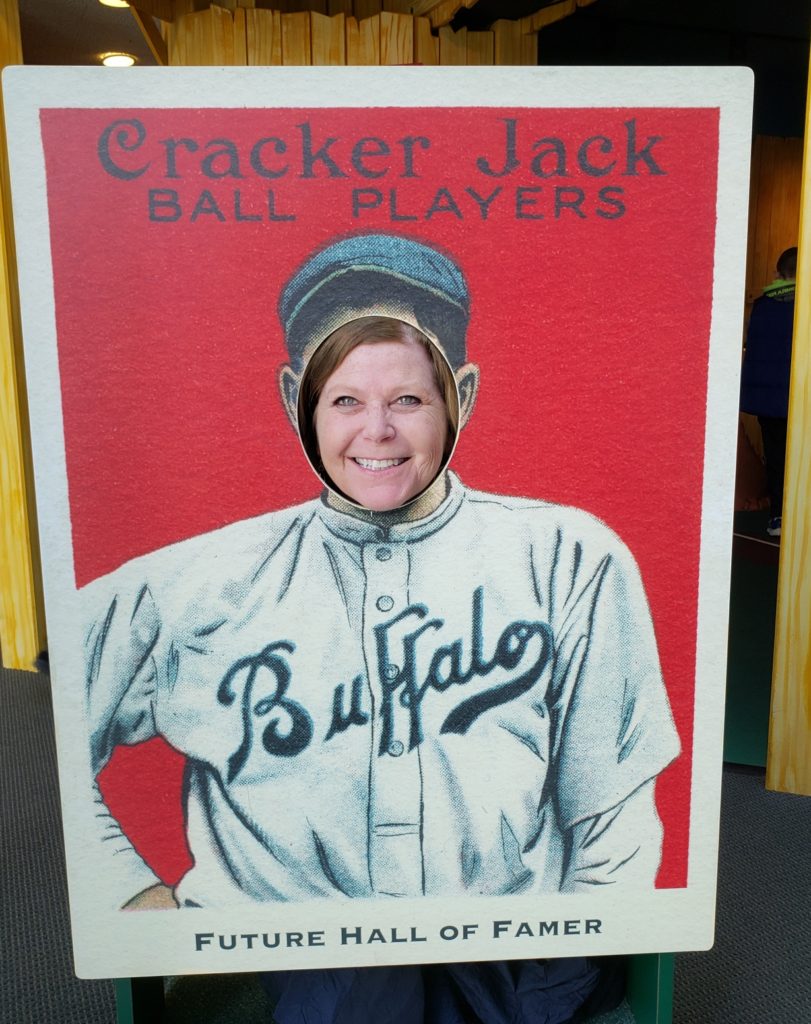 A fun night with the kids friends and some games was on the schedule for the evening and even though we’re not the fastest drawer on our phones for some of the games we played, we did hold our own!

Sunday was a trip to Massachusetts to check out the Berkshire Mountains and the Norman Rockwell Museum. 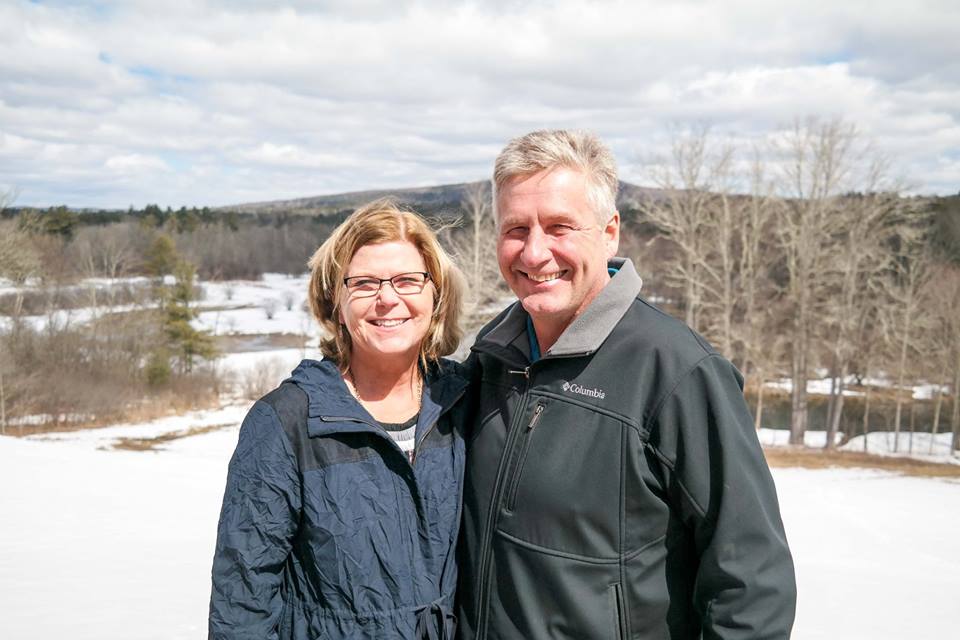 I honestly couldn’t believe how many pictures and stuff that Norman Rockwell did and even though there was a ton of great pictures in the museum,  this one was definitely was my favorite. 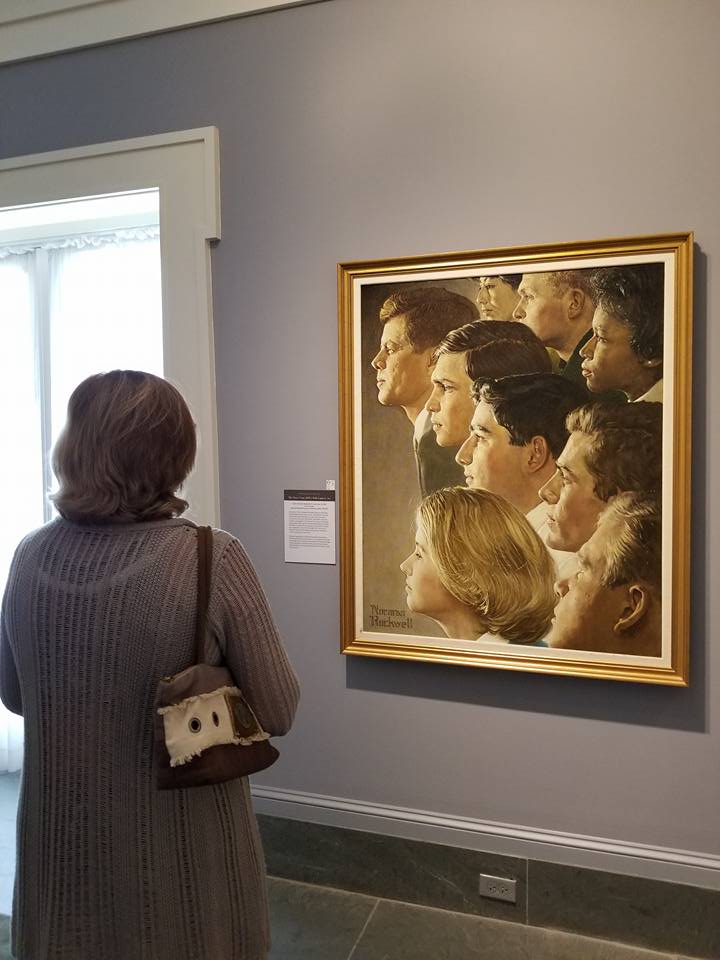 And this was the second favorite. 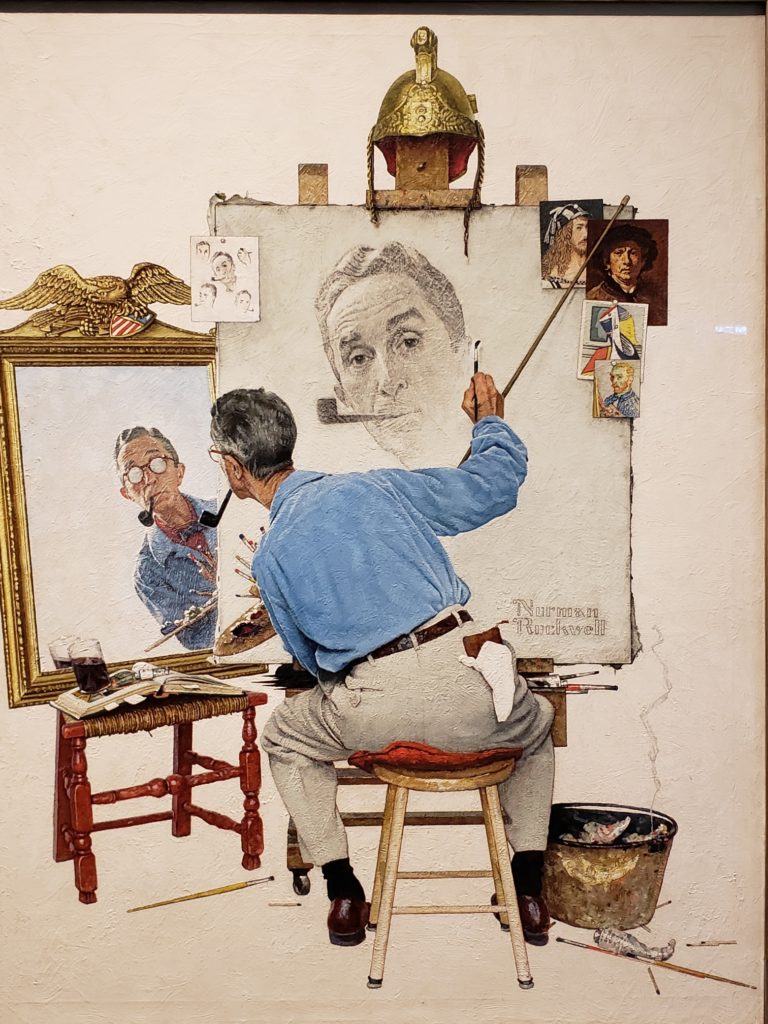 One the way home we stopped off where the Erie Canal started. 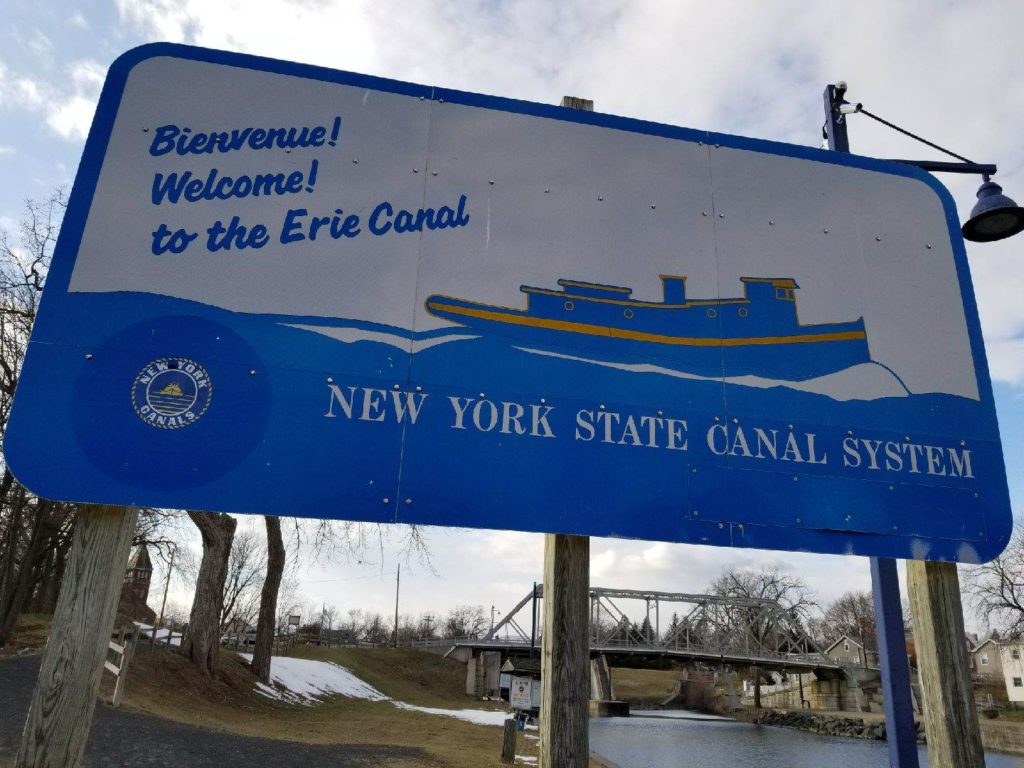 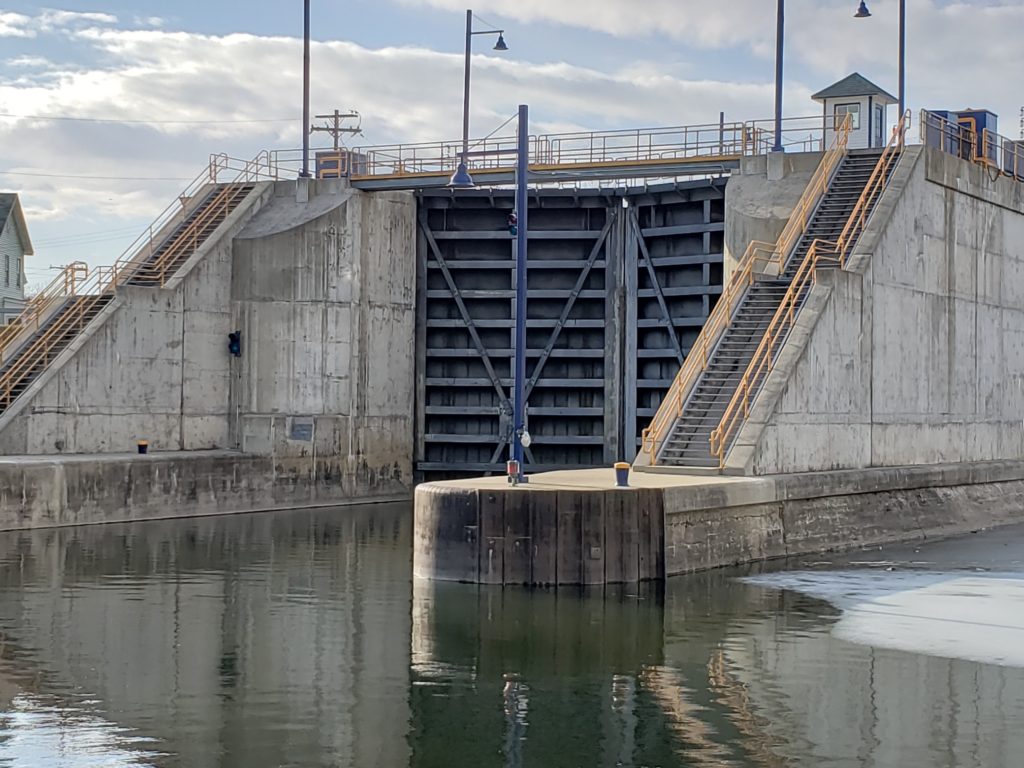 We were lucky to see a couple of years ago where 2nd channel of the Panama Canal was being made, so this was totally cool to see this today too!

There was some time to also get in some tourist shopping in and then before you know it we were heading back to Iowa on Monday.

But on the flight home I was thinking just how lucky we were. Seeing all the kids within the last two weeks – and well you just can’t get any better than that! 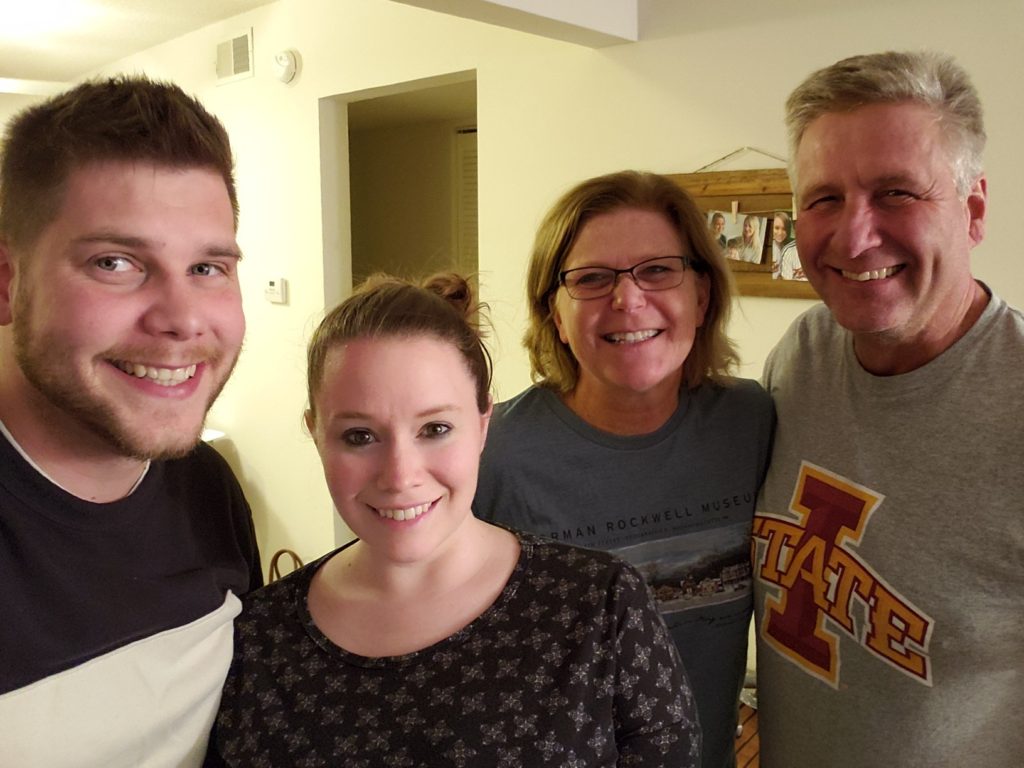 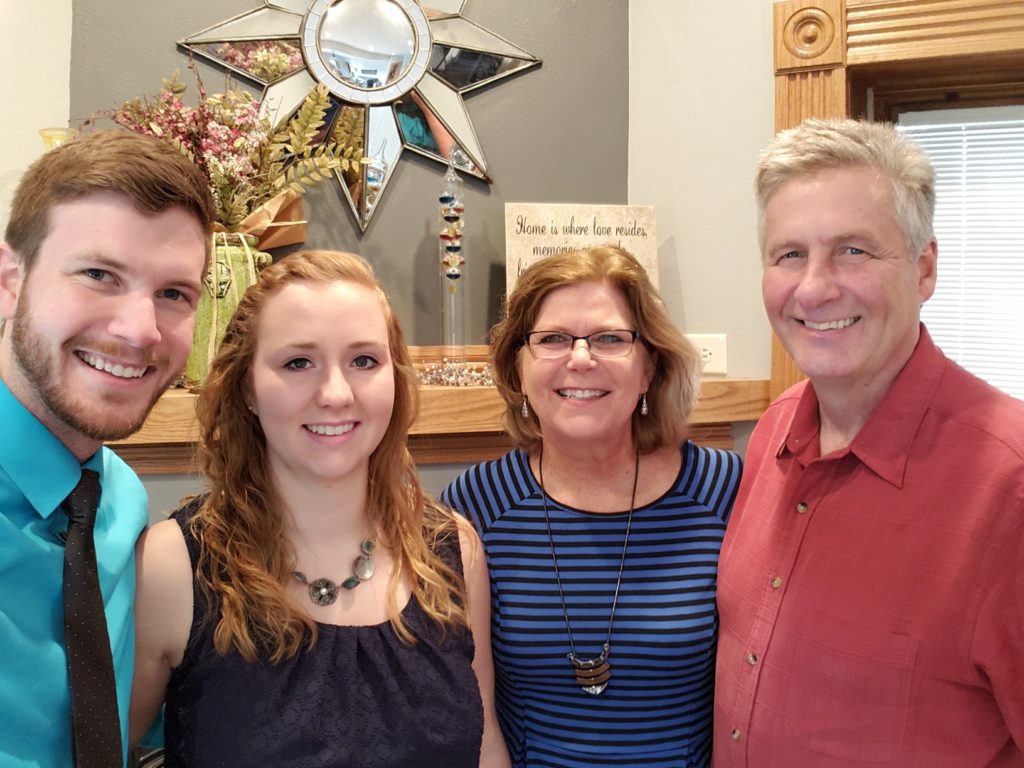 This entry was posted in Family, Places to visit. Bookmark the permalink.