It’s a Spa kind of day

It’s that time of the year again when the dogs get loaded up and off to the Vet we go. Not only is this a good time to catch up on their shots, but it’s also a good time for them to get all gussied up for the summer.

So today was the day! It’s  off to the Vet we go Tuesday. Now all we have to do is to get them in the truck. And wouldn’t you know it, we never thought about putting collars on them until now. See the dogs for some reason can’t keep a collar on them to save their soul! We did eventually find one of Kaiser’s so he at least had one on before we left. That way the girls at the Vet’s office wouldn’t think we were terrible dog owners or something. This way they would only think we’re only half terrible. Humm…maybe I should have Daryl bring in Reno ??

My plan was to get the dogs to the vet’s office before work and with the office in the same town I knew that it wouldn’t take too long for me to get to the office.

Now was the challenge. Will the dogs behave? First up was Reno. She came out of the barn and jumped right into the truck. What a good girl.

Next was Kaiser. Yea, not so good. He wasn’t going to get in the truck for NOTHING! Finally Daryl picked him up and put him in. Seriously aren’t dogs supposed to like to go on rides?

Well with Kaiser slobbering all over Daryl when he moved the truck from the barn to the house (which was only a couple of feet!) it was decided that Daryl would drive the truck and I’d follow him with the other vehicle and then we’d switch. See I had to pick up the dogs after work because their spa day was going to be over.

After all the rain that we got last night, I was  a little nervous on our gravel road heading out because the road was washing out. But I knew that I had to keep going and I was glad to get through the bad spots without any problems. Later today I found out that the county came in and put out a bunch of hazard blocks around the roads by us because of the road washing out. 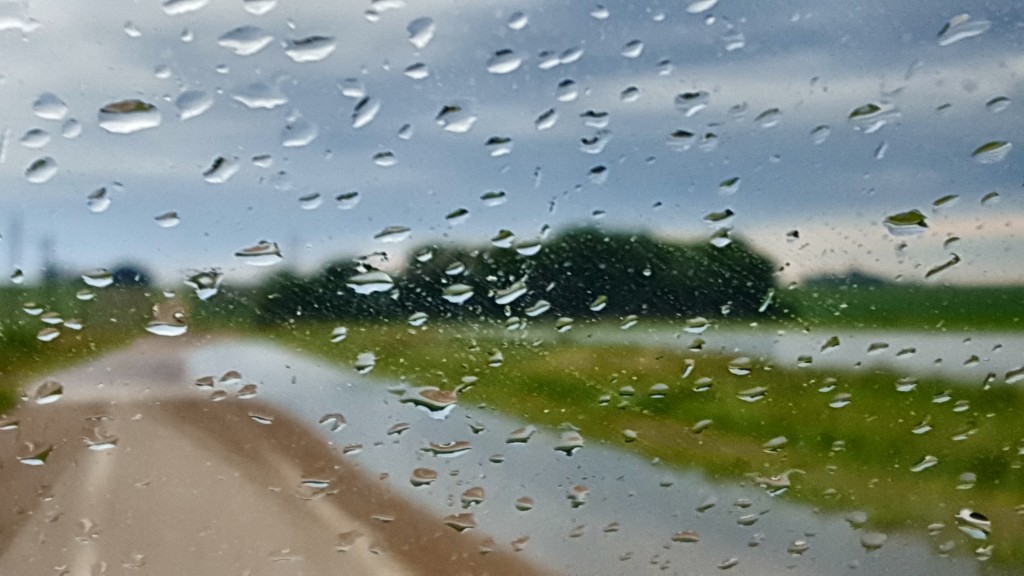 On route to the vet I tried to take a good picture of the 3 of them driving in front of me because honestly it was pretty funny! If you didn’t know that there was 2 dogs in the cab you would have sworn it was 3 people. The picture didn’t turn as well as I had hoped – but you can get the idea 🙂 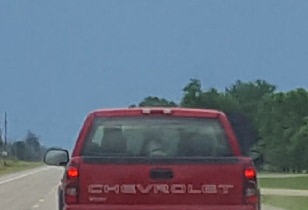 Everyone survived the trip and I just figured that once we opened the truck door that they would just take off running. Again first up was Reno. She looked at me and I swear she was almost smiling and jumped down and literally walked herself to the front door of the Vet’s office. I came up to her and opened the door and in she went.

Now with Kaiser it was a different story! Kaiser put his two paws down on the front seat and wasn’t going to budge!  After a lot of coaxing and with no luck, Daryl finally grabbed the dog under his belly and carried him out of the truck, around the sidewalk, and into the office.

When the receptionist asked if the vet knew what our dogs needed and I said yes, back to the cages they went. Reno walked right in and as she turned around to look at us as if she knew she was going to get the gold star for the day. Then when we tried to get Kaiser into the cage, again out come his paws and put them on both sides of the cage and locked his legs. He was NOT going to go into the cage willingly.  They had to do the bend the legs and distract him until finally he went in trick and I’m afraid it’s going to be a long day for the Vet’s!

As the day went on while I was at work I started to think about the question that I was asked if they knew everything that should be done for the dogs and decided to give them a quick call at break to see how it’s going.

And when I asked exactly that, do you know what they said? They said ‘well…. it’s not going so well’. I was kinda surprised to tell you the truth when they said that and asked what’s the matter? They said one of the dogs wasn’t cooperating and was so scared and could they sedate him? You guessed it. It was Kaiser. I wasn’t too excited about the whole sedation thing and said to call me if they had to do it. They never did call back. Whew!

As the day went on I did a call them to see how it was going they said ‘oh it’s going really good now!’ That Reno was in the tub getting a bath and there is no worries. Yup, you could see that writing on the wall. She’s still working on the gold star award.

When I stopped by later to pick them up the first dog out was Reno and I didn’t hardly recognize her. She walked up to me and with this grin on her face she kind of did a walk by and then turned her head I swear and then just looked at me like ‘ I’m so good looking’  It was hilarious! Then I could hear a dog barking in the back and kind of crying and when they brought Kaiser out of course he plowed right into Reno and was heading for the door. I think he was never was so relieved to get out this place!

They looked and smelled so good and with them both sporting collars now and bandanas,  I decided I should get a picture of them. Unfortunately I was totally unsuccessful at that! 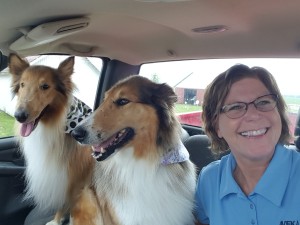 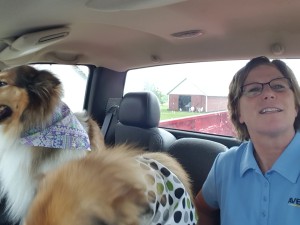 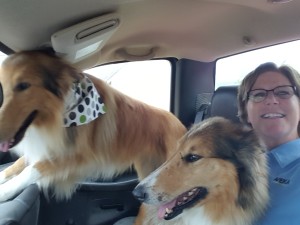 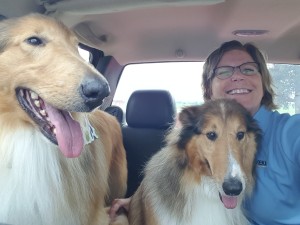 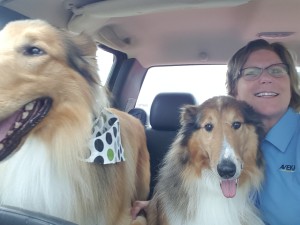 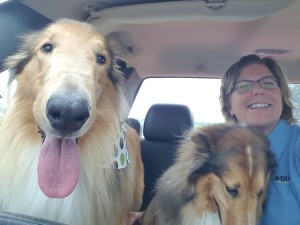 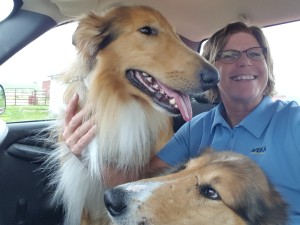 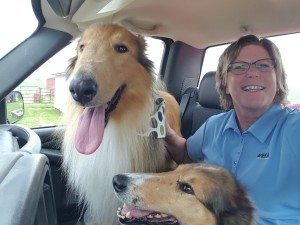 I finally just gave up and let them out of the truck.

This entry was posted in Our dogs, Uncategorized. Bookmark the permalink.